It’s ‘Hurricane Sunday’ with Hurricane Henri paying a visit to New England. It’s the first hurricane to make landfall in New England in 30 years. While we’ll be seeing mostly rain with some wind (30mph) up here in New Hampshire, we won’t have it nearly as bad as the folks in southern New England.

Katy is one of those folks in the path of Henri and she spent time getting ready, getting things from her yard and around her home put away or lashed down to keep them from being blown away. She also made preparations to bug out if things got bad. (I told her that if the need arose, I would pull the Official Weekend Pundit Lake Winnipesaukee Runabout out of the water and trailer it down to Connecticut to get her from her house if the flooding got bad enough.)

Of course I have heard more than a few of the ‘usual suspects’ claiming this storm is all the fault of climate change, as if hurricanes have never made landfall in New England before. There’s a long list of hurricanes hitting New England over the years, with the last one being Hurricane Bob in 1991. (Sandy was not a hurricane when it hit New York, New Jersey, and Connecticut back in 2012, but a tropical storm.) Considering Henri was barely a Category 1 hurricane when it made landfall, it doesn’t seem it can be blamed on climate change. Many of the previous hurricanes were much stronger when they made landfall, yet they haven’t been blamed on climate change.


I made some preparations for the storm as well, but mostly making sure I had a full tank of gas in the trusty RAM 1500, making my bi-weekly run to BJ’s on Saturday rather than today, and filling one of my gas caddies in case I need it for the pickup, the boat, or the generator. Cell phones and laptops were charged as were batteries for a couple of my two-way radios. I also made sure the propane tank for the gas grill was also filled. I did check the boat yesterday to make sure it was properly secured, though there was little chance for problems this far inland. Beyond that, I really didn’t do all that much. I certainly haven’t done nearly as much as Katy did down at her home in Connecticut.

Biden screws up the withdrawal of American citizens, their Afghan allies, and the military from Afghanistan so badly that our allies have been condemning him – officially – and the DNC-MSM have turned on him.

Trump addresses a rally in Alabama and delivers a scathing rebuke of how things have been handled by President *’s administration and hangers on.

“‘Do you think that General Patton was woke? I don’t think so. He was the exact opposite,’ Trump said. He pivoted to lambast notorious woke figure General Mark A. Milley who has defended the divisive teaching of critical race theory to military members. ‘You know what woke means? It means you’re a loser,’ Trump jabbed, adding: ‘Everything woke turns to sh*t.’ ”

I wonder how many of those who actually voted for SloJo are now regretting casting that vote?


Skip Murphy reminds us that it is not just Afghanistan from where we may need to consider withdrawing.

“In the worst year in Afghanistan, 2010, the U.S. suffered 440 troops killed in action. So far this year in Chicago, 480 people have been shot to death. When will the U.S. begin its withdrawal from Chicago?”

Indeed. Every weekend, the toll is displayed all over the nation and much of it is concentrated in “gangbanger” neighborhoods. Just like Biden and his staff, however, that are sounding like my 5-year-old Grandson in “WHAT cookie in my hand???” and denying he’s not to blame, so are the Chicago leadership doing the same in their jurisdictions.

Most often, they lay the blame on surrounding States that have more Constitutionally oriented gun laws even as they’ve created a Merry-Go-Round environment: arrest thugs, book’em, bring’em to Court, and then a gentle wrist slap, and they’re turned out onto the street.

It is a war in the Chicago environs but why should WE be concerned with it if Chicago’s leaders refuse to Follow The Law and handle these miscreants the way the Law demands they should be.

You brought it onto yourselves by coddling them this long.

It’s your problem and we probably should “withdraw” from them. Given that Democrats control the Federal Government, however, that’s not likely.

The Detroitification of Chicago continues apace. It will be interesting to see how long it will take for the depopulation of Chicago to reach the level of that of Detroit.


Can a rock be racist?


I have to agree with this: The Biden White House Is Betting That America Is Finished.

It is the dream of the Progressive totalitarians that they will soon be able to declare the rise of the New Soviet Union. No more Constitution. No need to gain political consensus. The new Nobles will dictate and the new Serfs will bow to their will...or die.

Here’s something else they should always remember: 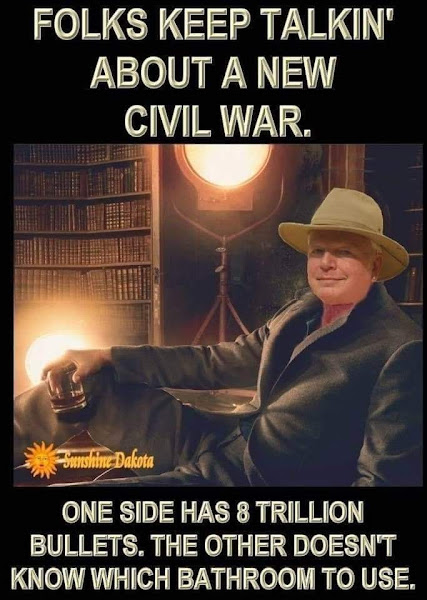 
And that’s the (soggy) news from Lake Winnipesaukee, where the rains have arrived, the weekenders have already left, and where Monday is lurking just around the corner.
Posted by DCE at 8/22/2021 11:34:00 AM
Email ThisBlogThis!Share to TwitterShare to FacebookShare to Pinterest
Newer Post Older Post Home