A-10 On The Chopping Block Again?

I think that almost everyone out there knows what I mean when I say “Warthog”, particularly if you are of a military bent. If you're not familiar with that, then what about the A-10?

It has been one of the most effective platforms for close air support ever created and has been proven again and again in places like Iraq and Afghanistan. While originally designed to counter Soviet armor in Western Europe, it turned out it was equally adept at taking out SAM and anti-aircraft artillery sites as well as laying down a world of hurt against enemy troops. It is one of the toughest aircraft in the US military arsenal, being able to survive in combat environments and take damage that would bring down its flying brethren, be they fixed or rotary wing aircraft. 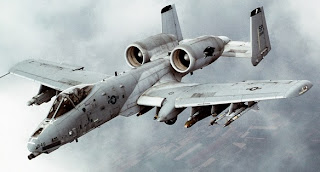 Yet the Air Force, in its infinite wisdom, has decided once again to kill off the A-10 in favor of much more expensive, more vulnerable, less capable, and untested aircraft that is still in development. I guess the A-10 just isn't 'sexy' enough despite its stellar combat record and its effectiveness on the battlefield. (This isn't the first time the USAF has tried to get rid of the A-10, it having wanted to use the F-16 in the attack role even though it was far more vulnerable to ground fire and moved too fast to be nearly as effective in a close air support role. But its performance during the Gulf War earned it a reprieve.)

J. Furman Daniel, III, gives us 10 good reasons to save the A-10 from the chopping block.

I won't reiterate them hear as I've already mentioned two of the most important reasons above. But if those two aren't good enough, how about the bottom line?

At present there are 340 A-10's in service. It would cost about $3.7 billion to keep them flying. But the cost of their supposed replacement, 300 of the F-35 Joint Strike Fighter, will cost ten times that much to acquire - $37 billion – and have much higher operating costs. Where are the cost savings the Pentagon is using to justify retiring the A-10? Even if new A-10's were built they would cost a fraction of the F-35's and still be far more capable in close air support and AAA suppression than the F-35 could ever dream to be.

This sounds like a combination of the Warthog being too ugly, too “unsexy” for the USAF to keep flying and a case of “penny wise, pound foolish”.
Posted by DCE at 5/03/2014 10:49:00 AM
Email ThisBlogThis!Share to TwitterShare to FacebookShare to Pinterest
Newer Post Older Post Home