We went from winter temps, to mid-spring temps, and back to winter temps in only four days – the upper 20’s to the 60’s and back to the lower 30’s. We enjoyed our preview of weather to come over the next few months, saw the last of the snow on roofs melt away and snowbanks shrink in size. The ice on the lakes also showed more openings in various places along the shorelines. The number of bob-houses on the ice has been shrinking as the ice has been getting thinner and should all be off the ice before April 1st. (Our state law requires them to be off by then or the owners can be fined because after that date it can be too dangerous to venture onto the ice to remove them.)

I spent the day yesterday traveling around the Big Lake with an old friend, catching up and making plans for a business venture. What better place and time to discuss the future than while traveling around on a nice day?


I was saddened to hear of the passing of ‘Marvelous’ Marvin Hagler, a boxing great, a gentleman, and a fellow New Hampshire resident.

I remember watching his fight against Tony Sibson at the Centrum in Worcester, Massachusetts when he pummeled him into submission in 6 rounds. As Sibson said after the fight, it was the first time he’d ever been hurt like that in a fight. Hagler’s win against Tommy Hearns was even more impressive, defeating Hearns in 3 rounds.


Just when I think things couldn’t get any weirder I am proven wrong.

Adding details on pricing labels that inform consumers of the sex and skin color of the companies owners of the products being sold.

I’m sure they thought this was a great idea when they came up with it. No one will be as #Woke as us after adding details on our pricing labels...

The only products exempted from the scheme are white-owned businesses which are the same as labeling them, yes?

If one makes their purchasing decisions based solely upon the race/gender/LGBTQ status of those who own the company that made/provided the product and not upon the quality, cost, or efficacy of the product, that is their choice. But couldn’t that choice be seen as being based upon racism/sexism/whateverism and not upon the quality, price, or availability of the product regardless of the sex, race, or LGBTQ status of the manufacturer?

Somehow I doubt that observation will be brought up by our increasingly judgmental Progressive ‘betters’.

A few other questions:

Tracking your purchase based on the race of the companies that own or operate them? The #Wokeistan equivalent of a social credit-system like the one in China?

Will banks cancel your credit card if you don’t buy a racially diverse selection of products? You’re buying too many products made by white men. You’ve been scheduled for mandatory sensitivity and diversity training.

But you weren’t even looking at the labels? Too bad.

Do you think it can’t happen? How many other things that we thought wouldn’t happen are now reality?


Daylight Savings Time has returned and once again people are asking why we even bother with the change. Frankly, it’s a pain in the butt, it’s disruptive, and changing between Standard and Daylight Savings serves no real purpose, at least for those of us living in the extreme eastern edges of each time zone. (It’s ironic that ‘Standard’ time lasts four months and one week while DST lasts seven months and three weeks. Which is really Standard Time?)

More than a few of us here in New Hampshire, Maine, and Massachusetts have expressed the desire to remain in Daylight Savings Time or to switch to the Atlantic Time Zone. We would much prefer to retain daylight at the end of the day considering we see sunset as early as 3:30PM during the depths of winter. For some of us that means we see no sunlight at all during the week, driving to and from work in the dark. I know I don’t like it.

Remaining on Eastern Daylight Time or switching to Atlantic Standard Time year round helps solve that problem, at least here in the Tri-State area. Some will argue that the kids going to school in the dark will be a problem, but it wasn’t a problem back in the 1974 when Congress passed a bill in 1973 keeping DST in effect for a full year due to the effects of the Arab Oil Embargo. However, this wasn’t the first time the US remained on DST year round.

The US also remained on DST from 1942 to 1945, also known as “War Time”, at the urging of President Franklin Roosevelt.

It’s time to reconsider the twice-a-year change. I know these guys would appreciate it: 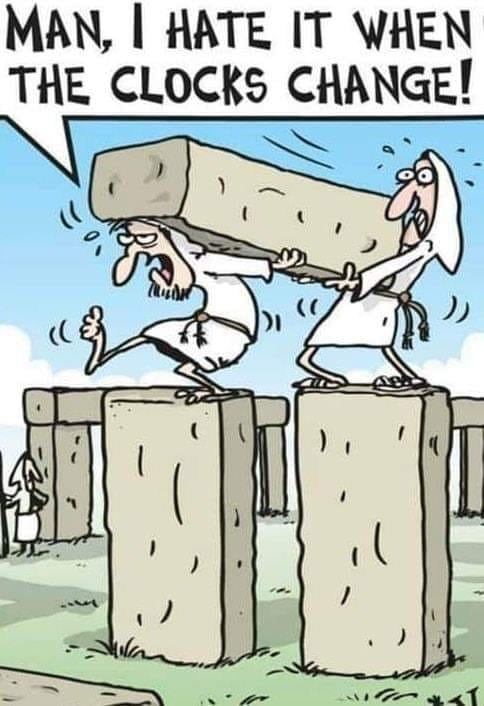 
And that’s the news from Lake Winnipesaukee, where the ice is getting thinner, the temperatures will be getting warmer, and where once again Monday will return to ruin everybody’s weekend.
Posted by DCE at 3/14/2021 12:52:00 PM
Email ThisBlogThis!Share to TwitterShare to FacebookShare to Pinterest
Newer Post Older Post Home