The New Face Of The $15 Minimum Wage Cashier

It's both interesting and disturbing to me that the DNC platform includes the push for a $15 minimum wage. Such a position may sound great on the face of it, but anyone who knows anything about economics or has run a business knows it will have some dire side effects the Democrats either don't know about, or worse, don't really care about as long as they win the election in November.

The biggest side effect the Democrats are ignoring – the hit to minimum wage earners many of whom will lose their jobs because their new wage makes it more attractive (and cheaper) to replace them with machines. This hit will be hurt those between the ages of 17-24, the group that makes up a large majority of those with minimum wage jobs. It will be jobs like those in fast food restaurants, convenience store/gas stations, supermarkets, and farms that will take the biggest hit. Most of those jobs are entry level jobs, in other words first jobs, that will go the way of the dodo and passenger pigeon. Those jobs helped train those with no experience about the responsibilities any job entails, and hopefully teaches good work habits. But those jobs will be gone, unemployment will rise, and all of the supposed 'benefits' of the more than doubled minimum wage will never materialize.

Instead, this is what we'll see: 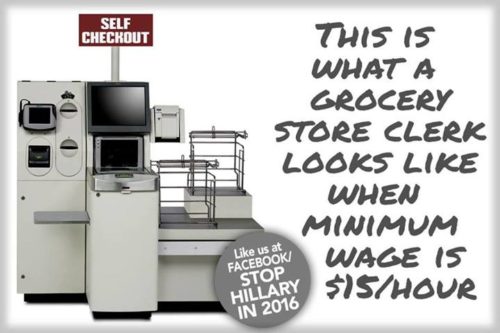