Don't Confuse Them With Facts

After every incident involving illegal guns or mentally ill persons shooting somebody, the call goes out to 'toughen' gun laws. What they really mean by toughen is to work towards banning gun ownership by law abiding citizens, not understanding that it's not the law abiding citizens committing these crimes.

Disarming the populace will not lessen gun violence, something we've seen proven again and again in this nation. Places like Washington DC are a perfect example, the city having banned gun ownership within the city. Washington DC, our nation's capitol, also became the murder capitol of our nation. Homicides committed with guns skyrocketed, proving that disarming the populace protected no one...except the criminals.

In states with high per capita gun ownership, violent crime rates are low. In fact, in those states, my home state of New Hampshire included, most homicides aren't committed with guns. (We have very few homicides in our state.) But that won't stop the so-called gun grabbers from trying to prevent people from owning them. What do you expect from people who base much of their argument on emotion rather than verifiable crime statistics?

Want an example of how high gun ownership rates affect crime rates? Then take a gander below: 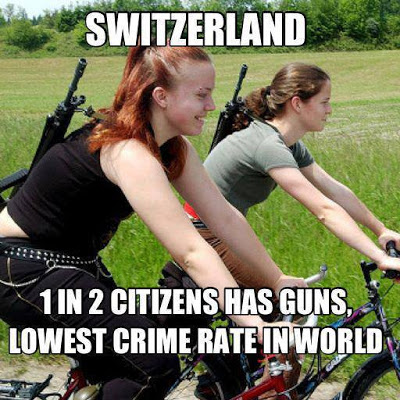