I've been a Trek fan since the series first aired on NBC back in 1966 (yes, I'm that old!). I've enjoyed the various series derived from the original series, and most of the movies as well.

There's a new Star Trek movie coming out, directed by JJ Abrams (of Lost and Cloverfield fame), due to be released some time next year. I've been keeping tabs on the casting and found some interesting choices.

One of the best decisions made was to cast Zachary Quinto as one of three Spocks to appear in the film. Most of you out there may not be familiar with the actor, but if any of you have ever watched Heroes on NBC, you know him better as Sylar, the main villain in the series.

When I heard Quinto was being considered as Spock, I thought it was a pretty good bet he'd be selected. And if you need a little bit of proof, how about this: 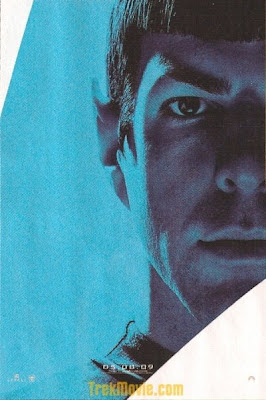 I'd say he's a ringer for Nimoy's Spock, wouldn't you?
Posted by DCE at 7/29/2008 10:24:00 PM
Email ThisBlogThis!Share to TwitterShare to FacebookShare to Pinterest