It’s been hot and humid up here at the lake, nothing unusual for summer. (If it were January I’d be worried about it.) I actually had to use the A/C in the trusty RAM 1500 for the first time. Yes, I have used it when the WP Mom was riding shotgun because she doesn’t like the wind blowing on her. But this was the first time I’ve used it this summer because I thought it was a bit too hot. That doesn’t happen too often.

The A/C at The Gulch is running, but it hasn’t been cranked to ‘11’. Mostly it has been to dry the air (our A/C can be set to cool or to dehumidify the air), making 79º inside feel quite comfortable without making the electric meter spin like a blender. One A/C unit running, a ceiling fan, and another small fan is enough to keep The Gulch comfortable even when it’s above 90º and very humid outside.


I’ve seen a few gas stations here showing the price of Regular at less than $4 per gallon, with the station where I usually fill up the trusty RAM 1500 selling it at $3.779/gallon. However, my ‘reference’ gas station has Regular posted at $4.099/gallon. On my travels around yesterday I saw that gas prices were all over the place, with the highest price being $4.799/gallon seen at stations near or on the Interstate, and $4.599/gallon here and there, both here at the lake and a number of stations south of here (Concord and Manchester, NH).

However, gas prices at the gas docks at one of the nearby marinas lists Midgrade (89 octane) for $5.399/gallon...and that’s one of the cheaper prices I’ve seen listed around the lake. I know that BeezleBub and I haven’t been using the Official Weekend Pundit Lake Winnipesaukee Runabout, aka The Boat, nearly as much as we usually do. If we’re lucky, we have been making it out once a week. We’re usually out three or more times a week. The high gas prices have certainly put a damper on our boating season so far.


I came across this by way of Skip over at GraniteGrok, a great idea that could save relationships and marriages across the nation. When you ask your significant other where she’d like to eat and she responds “I don’t care”, you’ll now have a place to take her: 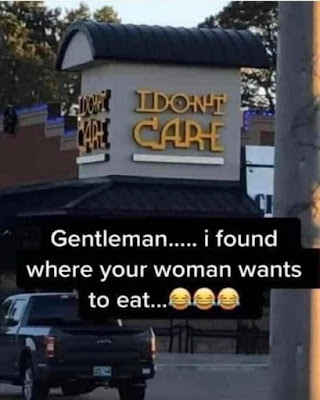 I think we could franchise this idea, a chain of restaurants with that name, and make billions! After that we start a second restaurant chain called Wherever You Want. It’s a stroke of genius!


The question of whether nuclear power plants, a truly zero-carbon power source, will ever be allowed to be built again in North America is one that still needs to be answered. Plans have been announced for a number of GEH (General Electric – Hitachi) small modular reactors to be installed in Saskatchewan and Ontario.

But in the end will they be allowed? Quite a few people commenting on the linking post asked that same question. One opined “The ecoloon lawsuits to prevent it will begin in 3,2,1…” They are probably right. That nuclear technology has changed over the past 50 years will not be germane to any discussion. Too many are viscerally opposed to nuclear power because they’ve been told “It’s bad for children and other living things.” That privation and lack of needed energy has killed more ‘children and other living things’ than nuclear power ever has is ignored.

That renewables are incapable of providing the power needed is also ignored, as is the environmental damage these renewable sources cause. I have found that some of the renewables proponents I’ve talked to have no idea the amount of land, the amount of ecosystem destruction that will be required for the ‘green’ energy they say they want. What is ironic is that many of the same proponents are against the infrastructure needed to support the green energy they claim they want. Specifically, they don’t like power lines. Do they even see the paradox of their diametrically opposed causes?


Do you want a preview of what the watermelon environmentalists have in store for us? Then you only need to look to see how Australia is handling the switchover to government dictated to ‘green’ energy.

In this case, seeing if it will be the cold or the carbon monoxide that will kill you first.

President Obama called it right when he said renewable energy would cause electricity bills to skyrocket. But he forgot to mention all the dead people.

Four more people are rushed to hospital after burning COALS inside their home as the price of electricity soars:

-Paramedics were called to Merrylands home in Sydney on Tuesday morning


This is what happens when government imposes restrictions on energy sources without making sure there’s something to replace the sources they’ve restricted. Australia did that which is why they’re having the problems they are. Presidentish Biden did something similar with his EO’s after entering office and we’ve seen the results at the gas pump, monthly oil/propane/natural gas bill, and electricity bill, though he hasn’t gone as far as Australia’s government has...yet. After all, he’s only been in office for 18 months. Australia has been working towards this for a number of years and their efforts have finally come to fruition – sky high energy prices and dead people.


And that’s the news from Lake Winnipesaukee, where the temperatures and humidity are high, the A/C is doing its job, and Monday is again coming around all too soon.