It’s been a hot and humid day here today. That’s not unexpected since it is summer. But to hear some folks you’d think it had never been in the 90’s before. While we don’t get a lot of 90º days here, we do get them. Other areas of the US see weeks and weeks of temps in the 90’s and you don’t see people dropping dead in the hundreds (like in Europe). We can handle it.

We spent a few hours out on the lake today despite the other weekend boaters being out there. It wasn’t as quite as bad as I expected, but it still wasn’t great. Marine gas is still expensive and boats aren’t exactly fuel efficient, so a lot of folks are just putting along at headway speed as they head to a place to anchor and go swimming or picnicking or whatever. (I dropped $100 for a little over 18 gallons of gas at the marina across from where we dock The Boat.) We slowly cruised to one of our favorite places, dropped anchor, ate some lunch, and did a little swimming. Once done, we weighed anchor and continued on our way back to our dock.

Not a bad way to spend a hot and humid day.


Speaking of hot and humid, it seems the Europeans are dealing with well above normal temperatures, with some in the UK breaking all time records. It doesn’t help that much of Europe (and specifically the UK) doesn’t have A/C.

I have had more than a few of my European friends and acquaintances asking why we need it. When I tell them that most of the US is considerably farther south than Europe, they don’t believe me. (As a bit of climate trivia, the British considered diplomatic postings to Washington DC as a tropical post...until air conditioning came into being.) I have sent maps similar to the one below to prove my point and they are usually surprised. That US cities like Houston and New Orleans are at the same latitude as Cairo surprises them...and Cairo is farther north than Miami. The entire UK is farther north than the Continental US. Paris is just south of the western US/Canadian border. 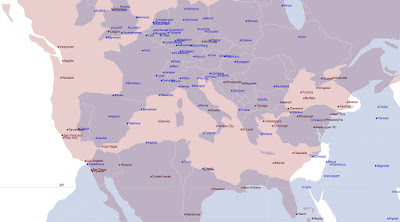 
It has become quite evident to anyone paying attention that we have a two-tier justice system in the US since Joe Biden took office.

Two examples: 1) Leftists riot, loot, commit assault, manslaughter and arson in a number of cities, yet are not arrested or tried, but a protest in Washington DC gets out of hand and it is labeled an insurrection (but none of the ‘insurrectionists’ were armed and the only ones who died were unarmed protesters killed by police). 2) Pro-life advocates protest outside of abortion clinics and are harassed, assaulted, and in some cases are ordered to cease and desist by a court, but pro-abortion advocates attack over 50 pro-life pregnancy centers and law enforcement does nothing. I figure it’s only a matter of time before these same ‘advocates’ start killing people because they figure they don’t have to don’t have to worry about being punished.

Two-tier legal systems always fail, usually in a spectacular fashion and not to the benefit of those supporting it. Then, the Left has always liked such systems because they use one to protect their operatives and the other to punish their opponents.


Want to know what Congressional Democrats are really doing when they promise “This, That, and the Other Thing”?

You hear them talking about trying to help the middle class, the backbone of the American economy. But what are they really doing? Getting ready to tax them out of existence.

Democrats are – by design – causing chaos in the American economy. But Biden’s promise to not raise taxes on anyone with incomes under $400,000 is a blatant lie. If the tax gimmick (HR 5376) they have proposed is enacted, income taxes for everyone in all income brackets would be raised – without any tax relief for anyone.

The JCT- Joint Commission on Taxation – a bipartisan commission that has economists as part of its makeup, analyzed the Democrat Tax gimmick and found that even Americans making between $50,000 and $75,000 and all other income levels will see a tax increase by 2029 with no tax breaks. All of which blows Biden’s campaign promises to smithereens.

At a time when everything from groceries to gas has people strapped down, Biden’s tax gimmick threatens to derail Americans’ incomes even worse by increasing taxes. Independent studies by the Tax Foundation and the Committee for a Responsible Federal Budget (CRFB) have shown that this Democrat proposal would literally wipe out any “hit” on the wealthy and pass the burden to the lower income brackets. America’s middle class would disappear in under this Democrat tax gimmick – which is by design. Communism by any other name is still the same. There is no “middle class” in a communist society. Only the elite wealthy will remain.

This is nothing new so it isn’t all that surprising to anyone understanding how the whole Tax-and-Spend sleight-of-hand works.


I have wondered this, too.

Why is life expectancy in the US lower than other rich countries?

You would think it would be higher considering the level of medical technology and treatments available today. Then again, we have a lot more obese people than other rich countries and we have all been told that obesity is a major contributor to all kinds to health issues. (Obesity and its side effects like diabetes was seen as a major contributor to Covid deaths.) Then there’s this:

Why do Americans have a lower life expectancy than people in other rich countries, despite paying so much more for health care?

The short summary of what I will discuss below is that Americans suffer higher death rates from smoking, obesity, homicides, opioid overdoses, suicides, road accidents, and infant deaths. In addition to this, deeper poverty and less access to healthcare mean Americans at lower incomes die at a younger age than poor people in other rich countries.

As the saying goes, Read The Whole Thing.


And that’s the news from Lake Winnipesaukee, where the summerfolk have been out on the lake in force, gas prices at the marinas are still high, and where we’re experiencing summer weather...not unexpectedly.
Posted by DCE at 7/17/2022 05:08:00 PM
Email ThisBlogThis!Share to TwitterShare to FacebookShare to Pinterest
Newer Post Older Post Home