One of the ‘rituals’ of spring in our town is what are called ‘Free Dump Days’ which allows residents to haul all kinds of junk and detritus to our dump...err...Solid Waste Center and dispose of it for free. Things like construction demo, old furniture, mattresses and box springs, old lawn mowers and snowblowers, appliances, and so on can be disposed of for free. Some of those items usually require those dumping them to pay a fee to dispose of them. But for two days in the spring, people all throughout town can get rid of all that junk. A lot of folks make use of those days to clean up around their homes or lake cottages, signifying the approach of another summer.

From reports I’ve seen, Saturday’s FDD was a big success, with a line of cars and trucks almost a half-mile long waiting to get in. Some of that might have been due to last year’s Free Dump Days having been canceled due to Covid-19, so there were two year’s worth of junk to dispose of.

Free Dump Days moves us one step closer to summer.


I have to admit to being dismayed seeing a lengthy real estate article in our local paper touting the joys and advantages of moving to our town. It sang its praises, with a list of all the great things that make it a great place to live.

Just what we needed. [/sarc]

I was tempted to write a rebuttal article, informing people why they should stay as far away from our town as they can...except for a week or two in the summer.

I want to tell them about the all the potholed roads, heavy traffic, bible-thumping/gun-toting bitter clingers who don’t cotton to “flatlanders” taking over our town, informing them how the sidewalks are rolled up after 8:30PM, the streetlamps (what there are of them) are turned off at 9PM, and how they have to keep an eye and ear open for for packs of coyotes just waiting to pounce on them in the dark. Oh, and did I mention the mountain lions and fisher cats waiting to do likewise while they’re out walking their dog?

And then there’s the housing market, with dilapidated houses/cottages and single-wide mobile homes asking prices being eight times the market value, places you’ll still have to sink a lot of money into to return them to livable condition.

So don’t move here. Stay away. You don’t want to live here.


Just when I thought they can’t get any stupider (or crazier), they prove me wrong.

It seems SUNY’s Geneseo campus has announced they will be expanding their segregated housing and support programs.

The State University at New York Geneseo has announced their newest addition to the school’s Umoja House, a dorm "for students of color."

SUNY Geneseo Associate Director of Residence Life for Educational Initiatives Meg Reitz reasoned that “Part of the goal in supporting BIPOC students is giving them a place where they don’t feel like they have to put on a different face."

I have to wonder if the next step will be a wholly segregated campus? I would like to think it won’t go that far, that some form of sanity will return. However, seeing how woke insanity has spread through academia like the Black Plague (no pun intended) did through Europe during the mid-14th century, it may be just a matter of time before some administrator proposes just such an idea, totally unaware (or uncaring) of the outcome of that kind of segregation in the past.

The NYPD lost over 15% of their force in 2020, with a little over 5300 officers departing. That’s a 75% increase over 2019. It will be no surprise if that number increases this year, particularly “as corrupt De Blasio and Cuomo allow the continued attack on cops...”

The NYPD isn’t the only city seeing this happen, with Minneapolis, Portland, Seattle, Atlanta, and other cities in the same situation. It will only get worse unless the Progressives running these blue cities are cured of their cranial-rectal inversions.


And then there’s this, something I feel more of us should be demanding, particularly in those cities where continual acts of “mostly peaceful” protests have been taking place and the damages have been mounting. 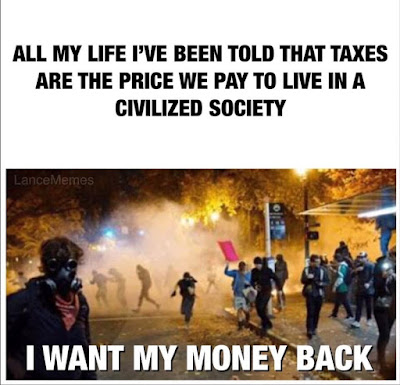 
And that’s the news from Lake Winnipesaukee, where we’re hoping for some more rain, warmer temps, and shorter Mondays.
Posted by DCE at 4/25/2021 01:22:00 PM
Email ThisBlogThis!Share to TwitterShare to FacebookShare to Pinterest
Newer Post Older Post Home