To borrow a subject line from Skip at Granite Grok, the following was promoted from the comments at GG about a subject near and dear to yours truly, that being the problem when folks “from away” relocate here to New Hampshire. We aren’t the only ‘locals’ that worry about such problems as we see the same concerns in places like Arizona, Nevada, Texas, and Wyoming worried about folks relocating from California trying to turn their states into the very place the fled from. In our case it’s folks from Massachusetts, Connecticut, and New York coming here and trying to recreate the very places they came here to get away from.

Over the years, I have seen many folks from away move into our town and they can be categorized into three different and distinct groups.

The first group are those who move here, do their best to fit in and enjoy their new home town, and after a few years you’d swear they’ve always lived here. That’s a good portion of the folks coming here from away.

The second group are those I call “drawbridge” folks.

They move into town and then want to freeze everything, allow no changes of any kind. In effect, they want to ‘raise the drawbridge’ to prevent change from entering the town. While I can understand this mentality, it isn’t realistic. Change is inevitable. Some changes will happen quickly, usually forced by circumstances. Other changes will take place slowly, a little at a time and barely noticeable, but it will happen.

Most “drawbridge” come to realize their expectations are unrealistic and eventually come around. Those who can’t come around fight against every change, large or small, and tend to be unhappy about the changes they see. There is no mollifying them. Fortunately they tend to be a very small minority of those moving here from away, but they can be the most problematic.

The third group tends to be the loudest, most disruptive, and least likely to listen to reason. It is this group that Skip and commenter NHNative address (hence the “Promoted from the Comments” tag) .

They are the folks that move here to get away from wherever they came from, and the first thing they do I try to recreate the very place they fled, recreating the very conditions that caused them to flee “back where they came from” to begin with. They want all of the amenities of their old home towns and expect the rest of us to pay to provide them, amenities the rest of us couldn’t possibly care any less about than we already do. They make a big stink if we bumpkins don’t automatically bow to their ‘superior’ wisdom, not understanding that their wisdom isn’t all that wise and rarely applicable to their new situation. Those with lots of money tend to be the most obnoxious, not understanding that some of the bumpkins have even more money than they do or, lacking that level of cash, have far more influence in the town/county/state than the newcomers could ever hope to have.

It is to this group the following message is addressed: 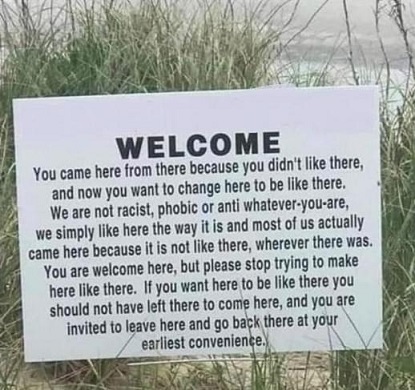