It's Snowmageddon All Over Again

It’s Saturday and people (or should I say the local media) are losing their collective minds.

What big crisis has been driving this losing of minds?

In this case a coastal storm, and more specifically, a Nor’easter.

It isn’t like we’ve never experienced Nor’easters before. This is New England, after all, and Nor’easters are part and parcel of winter in New England. While it is the first Nor’easter of the coming winter season, it isn’t the first we’ve ever experienced. We know how to handle them. But to hear the media you’d think it was The Apocalypse, the long prophesied Snowmageddon. The TV media has broken out their ominous Storm Center music and graphics. The news anchors talk about the the coming snowstorm “with a gleam in [their] eye”, telling us how we’re all gonna DIE!!!

What gets me is that some people are acting as if we’ve never experienced a snowstorm before. The typical Saturday morning supermarket ‘rush’ saw a lot of cars filling the parking lots at the two supermarkets in town, but the number of cars was much higher than what we usually see, probably folks buying up three weeks’ worth of bread and milk for something that was going to last less then 12 hours once it started snowing.

The town and state highway departments certainly aren’t alarmed by what’s coming. They’ve been making preparations for a couple of days now, mounting plows and salt spreaders on their trucks and making sure everything works. Beyond that, they don’t seem to be concerned knowing they’ll be able to handle what the forecasters have been saying is coming our way. For them, it will be just another typical winter storm.

I know I’ve made preparations, but they are what I do prior to every Nor’easter – Make sure the Trusty RAM 1500’s gas tank is full, the 14-gallon gas caddy and 100-lb propane bottle are full (fuel for the generator), my cell phone, tablet, laptops and two-way handie-talkie were all charged, my winter gear – boots, jacket, gloves, hat – were ready to go, and spare batteries for flashlights/storm lanterns/portable radio were on hand. Snow shovels, sand, and ice melt are in the garage and ready to go. Many of the folks I know make similar preparations for storms like this. It’s what we do up here.

As I write this – just a little past noon – it has started snowing. Nothing heavy at this point. It’s still just above freezing, so that snow is still mixed with some rain, but that won’t be true for long. Now all we have to do is let the snow fall and wait for the end of it so we can clean it up and go on with our lives. No Snowmageddon, at least not this time.

UPDATE: By way of Powerline 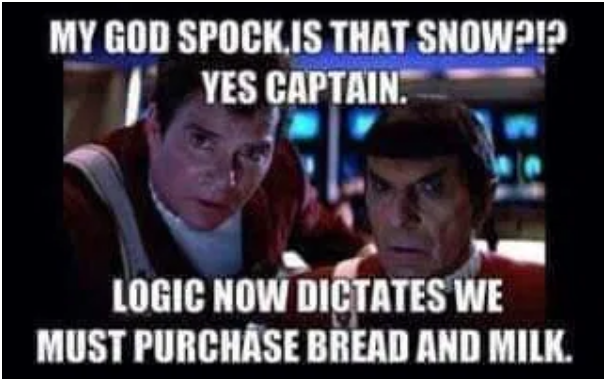