First Big Snow Of The Season

Four to six inches of snow in our area, they said.

A quick hitting storm that will be in and out in about 10 hours, they said.

After almost 15 hours of heavy snow we had about 30 inches of snowfall.

At around 11AM there was over two feet of snow here in The Gulch, as you can see from this picture of the trusty RAM 1500 4x4: 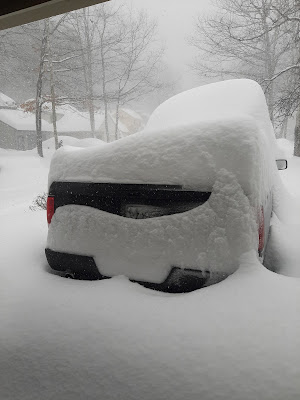 By 2PM the snow tapered off and we had 30 inches on the ground.

It was so bad that Debpool (the new blog moniker for Deb because she keeps coming back from adversity again and again, just like Deadpool, but without the loss of appendages or other body parts), couldn’t even make it out of her garage, let alone to work. Her driveway wasn’t plowed, her road wasn’t plowed, nor was the road leading to her road.

She called me a little past 2PM asking for a ride to work since there was no way she was going to be able to make it to work under the circumstances, so I logged off from work and started digging out the trusty RAM 1500 just enough so I could get it out of the driveway. An hour later (yes, an hour) and I was on my way to pick her up. About an hour-and-a-half later and I was dropping her off at work, a trip that usually takes about 25 minutes.

I got back to The Gulch around 5:30PM and started digging out the rest of the driveway so I could pull back in to the driveway...and of course one of the plow crews showed up and completed the last 10% of the driveway I hadn’t cleared yet. But at least it was cleared. 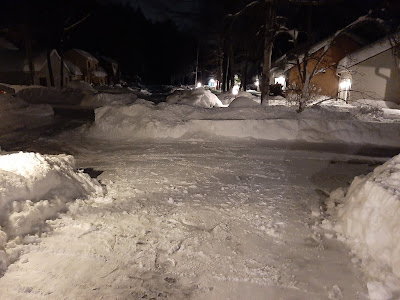 Tomorrow I get to break out the roof rake and pull almost 3 feet of snow from the roof...and shovel some more.

Welcome to winter in New Hampshire.

At least we're going to have a White Christmas this year!
Posted by DCE at 12/17/2020 08:54:00 PM
Email ThisBlogThis!Share to TwitterShare to FacebookShare to Pinterest
Newer Post Older Post Home