We are enjoying the quiet now that Labor Day Weekend is well behind us. For the most part the summerfolk are gone, meaning the places we locals like to patronize are more accessible than they have been the past three months. A good number of the seasonal businesses are closed, with the last of them pulling the plug for the year sometime between now and Columbus Day, allowing them to service the tourist who will be hear once the fall foliage season starts.

Even though ‘official’ summer has ended, there are still a number of summer activities we are enjoying such as boating and swimming – the lake water is still quite warm – hitting the local ice cream stands and clam shacks, and partaking of some of the summer items still on the menus of our local restaurants.

As long as the weather holds I expect we’ll be boating until the end of October, though BeezleBub will be putting his jet ski up for the winter sometime in the next two or three weeks.


The watermelon environmentalists are making the people of California reap what the enviros had sowed, with years of forest mismanagement now coming back to haunt them.

While Nancy Pelosi is laying the blame on climate change for the widespread fires devastating the Pyrite State, it has been that aforementioned forest mismanagement driving the fires, period. California has become a shining example of how not to manage forests.


I don’t know about any of you, but I doubt I could care any less than I do about the start of the NFL season. As a long time Patriots and Eagles fan, it pains me to see the NFL become less about sports and more about being woke. It appears I am not the only one.

When the boos rained down on to Arrowhead Stadium at Thursday’s NFL season opener as members of the Kansas City Chiefs locked arms for a “Moment of Unity,” it was the latest sign that some fans want teams to play sports, not politics.

And now, Gallup has confirmed that the nation is upset with the sports industry’s embrace of hot-button political issues.

In its latest industry ratings, sports has gone from Rah! to nah.

If you go to YouTube and search for “Boycott NFL”, you’ll see video after video of die-hard NFL fans pulling the plug on pro football. Many of them can be seen removing all of the fan paraphernalia from their homes and burning it, explaining that they no longer had use for the NFL because it was no longer about football, but about politics. This attitude seems to cut across all lines, including political lines. Sports usually brings folks together, folks from all walks of life. Now it’s nothing more than an extension of the politics that has divided us and the fans are sick of it.

The NFL is going to learn the same lesson as Gillette did: “Get woke. Go broke.”

You piss off your fan base at your own peril.


Speaking of YouTube, another topic of great interest seems to be the #WalkAway Campaign, where Democrats, including long time Democrats, tell us why they are walking away from the party, in many cases explaining why they are voting for Trump. Some are even joining the Republican Party. In most cases it’s because they have found it comes closer to their beliefs than their old party.

They are making the same discovery the late Ronaldus Magnus did in his time:


If anyone ever tells you government is better at doing things than we are, show them this: 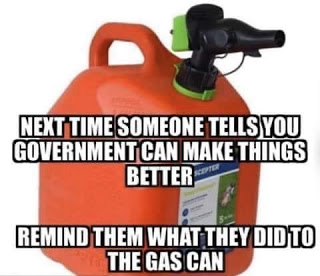 
Heard at the sermon at church this morning:

“You can’t convince anyone by yelling at them.”


And that’s the news from Lake Winnipesaukee, where the quiet has returned (for now), we have the lake to ourselves (for now), and foliage season will be arriving soon enough.
Posted by DCE at 9/13/2020 12:01:00 PM
Email ThisBlogThis!Share to TwitterShare to FacebookShare to Pinterest
Newer Post Older Post Home