It’s the opening weekend of the delayed Motorcycle Week up here in central New Hampshire, with a Covid-19 diminished crowd of around 150,000 bikers expected to visit over the next 8 days. We usually see between 300,000 and 350,000 bikers over the typical Motorcycle Week.

A usual number of vendors will be smaller, with beer tents not being allowed this year. Fortunately, the restrictions on restaurant seating expired this past week meaning the local restaurants can operate at full capacity.

It will be interesting to see how many bikers will make the trip this year. We’ll have a better feel for that come Thursday when the majority of the bikers will start arriving.


They know if they don’t cheat they can’t win.

It seems the Dartmouth College Democrats have been conspiring to get ineligible out-of-state voters to cast fraudulent absentee ballots in New Hampshire.

If they aren’t already registered to vote in New Hampshire, then they cannot register to vote while out of state. Under NH law they can’t use their dorm address to register to vote because they are not ‘domiciles’, something required in order to be eligible to vote. (Dorms, like hotels and motels, are considered transient housing and as such cannot be used to establish residency.) They are also required to have a valid NH ID, be it a drivers license or state issued non-drivers ID. But that hasn’t stopped the DCDs.

This is ballot box stuffing; vote fraud, clear as day.

These ‘students’ are at home and should vote in the town and state where they are now. Not where they could be in theory under other circumstances. A place where, even on campus, they do not live. They will never file taxes from their dorm address or be asked to serve on a jury. Heck, they can’t even license a dog in New Hampshire, but we should let them vote in our elections?

If it lets the Democrats cheat, to ‘stuff the ballot box’, then of course they’re all for it. After all, the ends justify the means, right?


I don’t need to add anything to this: 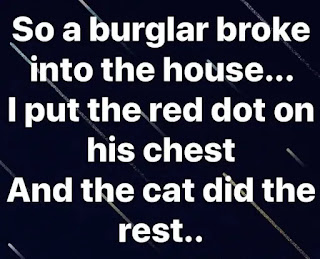 
I had thought to make this announcement in a separate post (and I might still do so), but I wanted to let my dozen or so regular readers know that I will be adding a new contributor to Weekend Pundit.

This has been in the works for a few weeks and came about after a series of e-mails discussing some of my posts, with them becoming more or a Point-Counterpoint discussion over a period of months. It came to me that perhaps this was something that should be shared by means other than copy-and-paste into a post. As I was pondering this, I received an e-mail asking if it would be a good idea to open the blog to another contributor.

That cinched it for me.

The new member of the team, Jodi, is a dyed-in-the-wool liberal, meaning our viewpoints will likely be on opposite ends of the political spectrum. (In the spirit of full disclosure, she is also one of the WP Nieces I have mentioned now and then.) She will be taking on my well-earned reputation as a curmudgeonly conservative. It will be my viewpoints, developed over decades of observation, experiences, and travel to an unnumbered amount of foreign lands, against hers, come by way of her upbringing and educational indoctrination.

I expect some good back-and-forth. I am also hoping to reactivate comments (probably using Disqus) as I have a feeling more than one or two of you will want to respond to our scribblings. When comments are restored I will have only one rule, shamelessly stolen from our friends over at GraniteGrok: Act like a troll and you will be banned.


And that’s the abbreviated news from Lake Winnipesaukee, where the roar of motorcycles can be heard everywhere, thunderstorms are forecast for today and tomorrow, and it’s time for me to get back to work even though it’s Sunday.
Posted by DCE at 8/23/2020 12:00:00 PM
Email ThisBlogThis!Share to TwitterShare to FacebookShare to Pinterest
Newer Post Older Post Home