Our town has seen a small number of new cases of coronavirus. According to the info made available, the new cases involve younger people with minimal or no symptoms. That seems to be the case with most of the people with positive Covid-19 test results. Do these new cases mean we need to shut down again? No, particularly in light of what we know now that we didn’t know back in March.

Do we need to take more extensive measures or will more diligent use of masks and hand-washing be enough? I lean towards the second and not the first. Use of masks and hand-washing seems to be the best way to deal with Covid-19, as well as isolating those most vulnerable to it such as those with underlying medical conditions - diabetes, COPD, heart disease, cancer, autoimmune diseases – or vitamin D deficiencies as well as those who are immunosuppressed. Going so far as to isolate everyone, something we now know doesn’t work all that well, is not the answer.

Hopefully our state leaders will not make that mistake...again.


I have been viewing a number of YouTube videos dealing with the breakdown of relationships between men and women, the unrealistic expectations and the changes in educational and economic circumstances for men and women.

There is a lot of anger out there.

Men, and particularly younger men, are giving up on relationships with women, tired of being treated as “not good enough” because they aren’t as educated or making as much money as many women these days.

Women, particularly those in the 30’s and 40’s, are wondering “Where are all the good men?” and “How come I can’t meet anyone who wants a long term relationship/marriage/children?”

I spent quite a bit of time watching videos from both sides of the issue, read and posted comments, primarily of the “Is this chasm between men and women something that is across the board or is it more prevalent in some areas rather than others?” type of comments.

I did get a few responses, with only a couple being angry and expletive-laden. But a few did respond, with those responses pointing to this issue being more prevalent in urban areas. When I thought about it, it made some kind of sense to me.

One of the most telling videos was posted by a woman who had worked as a matchmaker, telling why she closed her business: Women have unreal and impossible standards for the men they want to date. Could this be one reason why those aforementioned women in their 30’s and 40’s are still single?

There isn’t any one reason, but it wouldn’t surprise me if all of them are related to changes in our society that started back in the late 1960’s.


James Lindsay offers some reasons why the ‘woke’ won’t debate those who disagree with them.

Debate and conversation, especially when they rely upon reason, rationality, science, evidence, epistemic adequacy, and other Enlightenment-based tools of persuasion are the very thing they think produced injustice in the world in the first place. Those are not their methods and they reject them. Their methods are, instead, storytelling and counter-storytelling, appealing to emotions and subjectively interpreted lived experience, and problematizing arguments morally, on their moral terms.

To pick an example, you don’t have to have read any of this material as a 20-something college student to understand that there is a group of people who don’t care if the professor speaking on campus is a subject matter expert who might have some sound ideas. What the woke students care about is shouting down a bad person for reinforcing structural harm. You literally don’t have to argue, you just have to have a loud voice and a few accusations to level. And that’s exactly what they do.

I’ve run across this on a few occasions, coming up against someone so convinced their vision was right despite hundreds of years of evidence to the contrary. Nothing swayed their ‘faith’, nothing could convince them their vision was in any way in error even though their ‘vision’ was abhorrent to most folks.

That’s why I will not waste my time trying to convince the more fanatic ‘woke’. I have better things to do with my time.


Who will be the Democrat Party’s nominee for President? I and others have serious doubts that it will be Biden. As Don Bongino posted on Twitter:

I’m hearing from people close to the situation that Biden’s cognitive decline is rapidly worsening and is becoming increasingly difficult to mask. The Democrats are going to have to make a decision soon.

I think the media has been trying very hard to ignore Biden’s condition, but it’s becoming increasingly difficult to not notice and for the DNC and the media (but I repeat myself) to keep from the public. 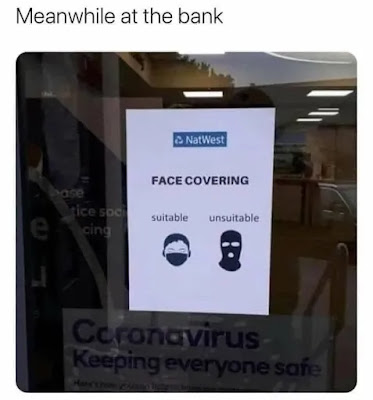 
And that’s the news from Lake Winnipesaukee, where we’re getting ready for some heavy rain courtesy of Tropical Storm Isaias, getting some boating in before Isaias arrives, and once again grateful that we actually have to go into work on Monday.
Posted by DCE at 8/02/2020 12:38:00 PM
Email ThisBlogThis!Share to TwitterShare to FacebookShare to Pinterest
Newer Post Older Post Home