This weekend’s weather has certainly been entirely different from what we saw last weekend and most of this past week. It was cooler and cloudier which was nice because it meant there was no need to turn on the A/C and we could leave the windows open.

For a summer that started out so cool and wet, it has changed into one of the warmer and more humid summers we’ve seen in a while. But even with this and the ongoing Covid-19 precautions, this part of New Hampshire has been seeing the usual summer crowds. However, the makeup of the crowds has changed, with a much larger proportion of them being folks from in-state. It’s been ‘staycations’ rather than ‘vacations’.

A number of summer attractions haven’t been operating this summer, one of the biggest being an outdoor concert venue that sees between 30 and 40 concert events per season. The same is true of some of the summer theater venues.

It has certainly made for a different summer this year.


Kamala Harris is now a target, or at least she should be if the Left Wing media were honest and approached her candidacy with the same zeal they had when they went after Sarah Palin.

However, we all know they won’t. Instead, they will carry water for her, protect her, and do everything they can to sanitize the more nefarious portions of her past. 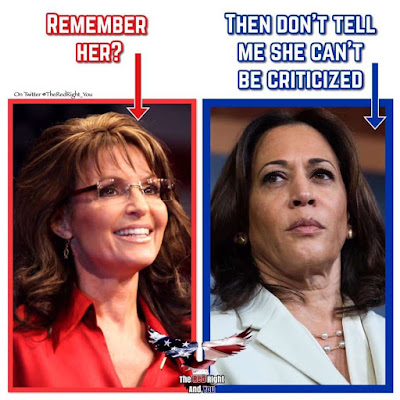 
I came across this video in the comments section of a post linking to Steven Hayward’s piece about Our Collapsing Cities.

The video shows block after block of boarded up stores along Manhattan’s Fifth Avenue. The driver lists the stores he sees, running the gamut from Rolex, Ferragamo, Saks Fifth Avenue, Puma, Nike, Ted Baker, Aldo’s, Adidas, AT&T, Oakley, Barnes & Noble, and a whole host of other retailers. Fifth Avenue and the cross-streets are deserted. Some retailers aren’t returning. Others haven’t made up their minds. Somehow I doubt Fifth Avenue will ever be the same since looters decided to collect ‘reparations’ on their terms.

New Yorkers can thank Comrade DeBlasio for the situation at Fifth Avenue and elsewhere in the city.


It looks like California Democrats are now showing their true colors, proposing a new “wealth tax” in order to fill a budget deficit of their own making.

This is not taxation. It is blatant theft, all in the name of “the greater good.” What they are proposing will take away assets owned by those they are taxing, assets the people worked for, assets people earned. In effect, California Democrats are telling anyone who makes it in the business world that they should “stop thinking about it as your money because it’s our money.”

The looters (for that’s what they are) are estimating it will raise $7.5 billion, but if past performance of other wealth taxes imposed elsewhere is any indicator, they won’t take in anywhere near that much. Their reasoning for such a tax is the usual “These greedy capitalists became wealthy on the backs of the poor and downtrodden” trope.

How much should the most successful among us be taxed? The idiotic notions that the rich got that way because of racism or because they “stood on the backs of the poor” are liberal political rhetoric and not serious debate points about the issue of wealth or taxes. And if the state is going to raise taxes on anyone, they are beholden to the people to find ways to cut government expenditures by an equal or greater amount.

California Democrats are not going to cut any of their pet programs to narrow the deficit, so they’re going to get cash from the most convenient source; the rich and successful.

They will also drive those paying those taxes out of California. Of course the Democrats have an answer to that problem: “California won’t have a problem with rich people fleeing the state. If they do, their wealth will still be taxed for 10 years after they go.”

Yeah, I’m sure that proviso will survive the expected court challenges. [/sarc]

Every time I think California’s One-Party GovernmentTM can’t get any stupider, they prove me wrong. When they do, the people of California suffer.


Democrats keep telling us vote-by-mail is the only way to enable voting during this era of Covid-19. Any complaints about how easy it is to commit vote fraud have been downplayed or even openly mocked as being paranoid.

Tell that to the city of Paterson, New Jersey.

Facing allegations of vote fraud, Councilman-elect Alex Mendez has decided to accept a judge’s proposal that would negate his victory in the May election and set up a new contest for Paterson’s 3rd Ward City Council seat.

After a bitter battle in the spring election, Mendez and former Councilman William McKoy will engage in a rematch that could shape the city’s political landscape for the next two years. Mendez had loomed as Mayor Andre Sayegh’s main opponent in the 2022 mayoral race after he beat McKoy by 240 votes in the spring.

But six days before Mendez was scheduled to take office as a councilman on July 1, the New Jersey Attorney General’s Office announced he was being charged with election fraud crimes, accusations that are pending. A judge subsequently ruled that the 3rd Ward council seat should stay vacant until the resolution of McKoy’s civil lawsuit claiming there was widespread wrongdoing in the election.

Both candidates have agreed to a special election – a repeat election – as the way to address the fraud vote perpetrated this past May. It’s a do-over because the vote-by-mail process was misused and fraudulent ballots were accepted, making the outcome impossible to determine.

This is the system the DNC wants to use for the election in November, leaving the election open to massive fraud, fraud that can be used to ensure election wins across the nation.


And that’s the news from Lake Winnipesaukee, where the latest heat wave has broken, the summer attractions that are open are doing a lot of business, and where people are trying to get their kids ready to go back to school...of some form.
Posted by DCE at 8/16/2020 12:37:00 PM
Email ThisBlogThis!Share to TwitterShare to FacebookShare to Pinterest
Newer Post Older Post Home