Is Seattle Going To Turn To Vigilante Justice?

Call this one a twofer as it’s two, two, two stories in one. (Classical reference to a classic TV ad from the 70’s.)

Things have gotten so bad in Seattle that the Police Chief has warned city residents “We cannot enforce the law. You are on your own.” 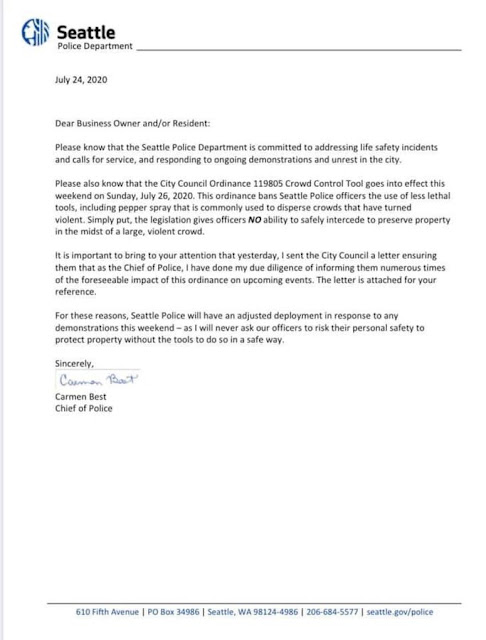 That the police department has been ordered not to use crowd-control devices to quell riots is troubling. They cannot intercede with those breaking the law right in front of them as they protest while damaging property,setting fires, and assaulting other people because they no longer are allowed to use the tools needed to do so.

What will the likely response be from business owners and residents knowing the police will not intervene?

The left has a long track record of getting everything wrong, so it’s of no surprise to anyone that Americans of all races, genders, religious, ideological, and etc. backgrounds are scrambling to get guns to protect themselves because the police have been neutralized. (Emphasis mine.)

Who would have thunk that the left would be the driving force behind Americans arming themselves in historic and record numbers? Anyone and everyone saw this coming, and the resultant, entirely predictable, carnage lies at the feet of clueless, truly myopic Democrats.

What will the response be? As Glenn Reynolds has written on this topic:

We’ll see a lot of vigilante justice. And what are people gonna do about it? Call the cops?

Remember, in the end the police aren’t there to protect the public from criminals, they’re there to protect criminals from the public. Communities dealt with crime long before police were invented, usually in rather harsh and low-due-process ways. The bargain was, let the police handle it instead. No police, no bargain.

The city government in Seattle has done everything it can to bring about the growing lawlessness in Seattle, yet it seems to me they are seeing it as a good thing. Yet residents and business owners are likely to disagree with them, seeing their properties damaged or destroyed, businesses looted or closed down. (This is the same city council with a member that wanted to ban business owners from hosing down the sidewalks in front of their businesses to remove urine and feces as it is “racially insensitive” because the very act might ‘trigger’ someone to feel the trauma of having firehoses turned upon them like the Civil Rights activists being opposed by Bull Connor back in the 1960’s.)

Tied in with this and the similar insanity being seen in other cities like Portland and San Francisco and Los Angeles, is this warning that must be taken to heart:

I’ve seen that kind of thing here in New Hampshire where those fleeing the People’s Republic of Massachusetts have come here and voted for the very same policies, laws, spending, and taxes they fled here to get away from. Then they complain that things are getting expensive in their towns, not making the connection between what they want and what they are now paying. New state laws, new town and zoning ordinances that add to the regulatory burden no one really wants or needs are the cost of bringing that baggage with them.
Posted by DCE at 7/25/2020 07:58:00 PM
Email ThisBlogThis!Share to TwitterShare to FacebookShare to Pinterest
Newer Post Older Post Home