Here it is, mid-March and it feels more like mid-April.

Temperatures have been in the 50's and 60's and the overnight temps have been staying above freezing for the most part. I haven't had to run the Official Weekend Pundit Woodstove for over a week now.

I can only hope we'll stay in this weather pattern for the rest of the month and into early April.

Apparently the over-the-top PC crowd have no use for Western Civilization, particularly Western Civ courses on college campuses. Never mind that it it wasn't for Western Civilization they most likely wouldn't be around acting as holier-than-thou a**sholes, preaching down to us as if they were the only arbiters of what is 'correct'. Certainly the feminists probably wouldn't exist because most of the non-Western civilizations still see women as barely above cattle.

Even the New York Times has tumbled to the fact that our education system is overmedicating boys, trying to make them fit the mold of well behaved girls. But boys are rambunctious, full of energy that needs to be burned off. In other words, normal kids. But instead of letting them be boys, the education elite seek to drug them into submission.

David Starr offers his solution to the immigration problem. Frankly, I think it is a lot better than many I've heard and helps build this nation up rather than making it weaker by flooding the nation with unskilled labor.

By way of Facebook comes this photo, a perfect illustration of why socialism is a bad economic and political system. 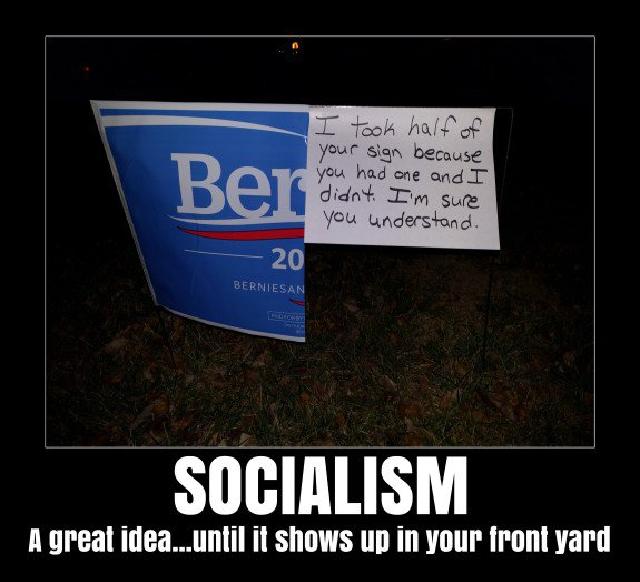 Cap'n Teach points us to a story about a strain of bacteria that can eat plastic, specifically PET, a plastic most often used for packaging thinks like drinks, cosmetics, and household cleaners.

At first blush it sounds like it would be quite useful, but I think it has to come with some kind of caveat as it would have to be used in a fashion that makes sure it doesn't destroy plastic while we're still using it. If it is a natural bacteria then I doubt we have anything to worry about. However, if it is a genetically modified organism there would need to be some kind of a kill switch built in to destroy it if it got out of control.

I have to agree with Stacy McCain's take on modern feminism.

Feminism is an insult to the intelligence of everyone who has two eyes and a brain. Feminism’s ideology and rhetoric are insulting to every honest man who ever lived and to every honest woman who ever loved a man. Why do feminists today constantly denounce men as “misogynists” for disagreeing with them? Why do feminists claim to be victims of “online harassment”? Why do university students engage in disruptive protests whenever anyone who dissents from feminism’s anti-male ideology — George Will, Wendy McElroy, Christina Hoff Sommers, Milo Yiannopoulous — dares to speak on campus?

Feminism is a totalitarian movement to destroy civilization as we know it.

Of course they never really think about what would replace our present civilization. They assume everything would be better. But if history is any guide it will be worse, particularly for women.

Another bit by way of Cap'n Teach is this question: Did the Democrats abandonment of the working class lead to the rise of Trump?

I know the EPA has been overreaching its charter on an ever growing list of issues, but the latest one takes the cake.

Now they want to crack down on manure. Yup. Manure.

Manure has been used for thousands of years to fertilize fields. But they doubt using it is a safe practice and are looking to due an assessment of the practice.

One has to wonder whether this is a different version of their overreach by way of the Clean Water Act when they have gone so far as to regulate puddles.

I guess the bureaucrats at the EPA have nothing better to do so they feel they have to justify their continued employment by regulating everything.

This BS has got to stop. (No pun intended.)

And that's the news from Lake Winnipesaukee, where the weather is above average, the last of the snow and ice is melting away, and where once again we have to suffer with the Daylight Savings Time switch.
Posted by DCE at 3/13/2016 08:24:00 PM
Email ThisBlogThis!Share to TwitterShare to FacebookShare to Pinterest
Newer Post Older Post Home