Thoughts On A Sunday - Monday Edition

Here it is, the Thoughts On A Sunday – Monday Edition.

Our Easter festivities lasted longer than we had anticipated here at The Manse so I didn't get the chance to post anything yesterday.

We had two visitors from Malaysia join us for Easter dinner, making an low-key holiday even more enjoyable. (It's one reason we didn't finish as early as we had anticipated, and I'm not complaining!) More on them in a later post.

I have tried to re-enable comments on the blog, but have gotten stuck as I can't seem to find where to make them reappear! This is something I've been working on for a while and have hit a brick wall time and time again. I'll get it figured out sooner or later.

What am I talking about? Why the 'Biden Rule', of course!

It's the typical Democrat double standard.

If you aren't sure of the difference between fascism, communism, socialism, or democratic socialism, I hope the below will remove any misunderstanding. 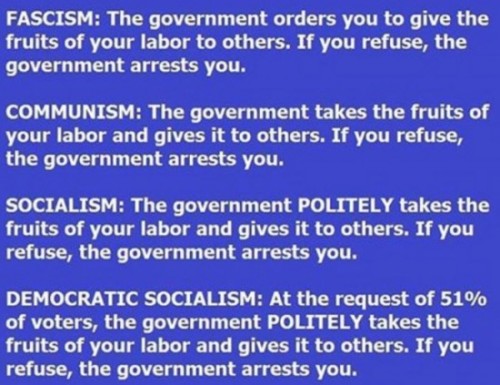 Why are Millennial Men such wimps?

That's an easy answer: Because Gender Feminists made them that way.

What's worse is that now many women can't figure out why they can't find manly men...or any non-PW'd men at all. That's also an easy answer: Because the non-wimps want nothing to do with you because they know you for what you are.

When Title IX first became law in 1972, it helped right some wrongs in regards to sex discrimination within our educational system.

Here it is, 44 years later and it has gone from helping to create a level playing field to being used as a bludgeon to stifle due process on college campuses and stifle free speech in our institutions of higher learning. It's original purpose has been perverted by our 'betters' and is used to discriminate against men and those who believe in the freedom of speech.

However 'scale' in this case means being able to use modular construction to lower construction costs because being able to build the various portions of the reactor in a factory and performing final assembly at the plant site. Creating parts for four small reactors is cheaper than doing so for one big reactor. The volume of parts decreases the per part cost.

The smaller reactors also allow more decentralized power generation as a larger number of small reactors spread out over a wide area is less vulnerable to disruptions, natural or man-made, than one big reactor at a central location.

Whenever one lowers standards for whatever business, trade, profession or school, the results are always the exact opposite of what those proposing such an action expected to occur.

Dumbing down STEM courses of study in order to 'protect' women from the expectations of professors and make it more “inclusive” will not garner the results the person who has put forth this proposal expects. It will merely make the problem of lowered expectations in our education system even worse and turn out unqualified graduates who will not be capable of performing the duties and tasks expected of them in the real world.

Not every narcissist is a sociopath, but all sociopaths are narcissists. Like every other manifestation of identity politics, feminism is ultimately about narcissism, a celebration of selfishness masquerading as “social justice” in which identifying yourself as suffering from oppression serves not only as a rationalization of one’s personal failures, but also as a justification for antisocial attitudes and behaviors.

That certainly sounds a lot like the SJW feminists to me.

And that's the belated and abbreviated news from Lake Winnipesaukee, where the rains have arrived, the warmer weather is arriving, and where Monday can't end too soon.
Posted by DCE at 3/28/2016 08:50:00 PM
Email ThisBlogThis!Share to TwitterShare to FacebookShare to Pinterest
Newer Post Older Post Home