Unintended But Not Unexpected

The buzz about LA's decision to boost the minimum wage in the city to $15 per hour hasn't died away, but more than a few folks have been finding out the hard way that it's going to have unintended consequences, much as has been seen in Seattle and San Francisco.

One of the biggest side effects is that it will cost a lot of people their jobs because many businesses employing people at minimum wage cannot justify paying the higher wage when their margins are already razor thin. This is a lesson the oh-so-helpful-and-compassionate Left never seems to learn despite many examples provided over the past few decades. Controlling the price of a commodity, be it something like gasoline or the cost of labor, always ends up increasing the costs and reducing the available supply. In the case of artificially boosting the cost of labor, the supply of jobs will decrease.

In 1971, in an attempt to tame inflation, Republican President Richard Nixon imposed controls on almost all prices. By 1974, he had lifted most of them. But those on gas remained. Under Democratic President Jimmy Carter, they led to widespread shortages and long lines at service stations -- and didn't keep prices from rising. But the controls lasted until his successor, Ronald Reagan, lifted them in 1981.

Liberals learned an unforgettable lesson: Price controls on gasoline don't work. In recent decades, when gas prices have soared, Democrats have shown no desire to repeat the lesson.

But they embrace a similar approach for another problem: low pay for many workers. Chicago decided last year to boost the minimum wage to $13 an hour by the middle of 2019. Seattle, San Francisco and Los Angeles have gone even higher, raising the floor to $15 an hour in the next few years, and other cities may follow suit. It's a price control on labor.

The problem is that a higher legal minimum wage is at odds with the prevailing supply of and demand for labor. If you set the minimum too high, you will get a shortage of jobs. Forbidding employers from paying $9 or $12 an hour means that many of their workers won't get $13 or $15 an hour. They will get zero per hour, because those jobs will disappear.

But unlike the lesson about gas prices and supplies, they've chosen to ignore the old lesson, thinking that it doesn't apply because they're talking about people, not gasoline. But they fail to understand that labor, meaning people, are a commodity just like any other. Try to artificially boost the cost of a commodity and you end up with less people willing to pay the price for it. The result – the demand for labor goes down. But that doesn't seem to worry the Minimum Wage Social Justice Warriors one bit.

Minimum-wage laws are another issue where the words seem to carry great weight, leading to the fact-free assumption that such laws will cause wages to rise to the legally specified minimum. Various studies going back for decades indicate that minimum-wage laws create unemployment, especially among younger, less experienced, and less skilled workers.

When you are unemployed, your wages are zero, regardless of what the minimum-wage law specifies.

There's the rub. Ask someone who is unemployed if they'd rather have a job at $7.25/hour or no job at all and the chances are they'd take the $7.25/hour job. It won't matter if the minimum wage is raised to $15/hour because they'll still have no job because many of them don't have the job skills or experience to make them worth hiring. This is particularly true “among younger, less experienced, and less skilled workers.”

And while the oh-so-helpful-and-compassionate Left has succeeded in pushing higher minimum wages in LA, Seattle, and San Francisco/Oakland, it appears they can't be bothered to answer questions being asked by the numerous business owners who are being drastically affected by their 'compassion'.

A recent story in a San Francisco newspaper says that some restaurants and grocery stores in Oakland’s Chinatown have closed after the city’s minimum wage was raised. Other small businesses there are not sure they are going to survive, because many depend on a thin profit margin and a high volume of sales.

At an angry meeting between local small-business owners and city officials, the local organization that had campaigned for the higher minimum wage was absent. They were probably some place congratulating themselves on having passed a humane “living wage” law. The group most affected was also absent — inexperienced and unskilled young people, who need a job to get some experience, even more than they need the money.

They almost never consider the consequences of their actions because, after all, they know better and can safely ignore the laws of economics, particularly when it comes to market forces. Their understanding of what drives prices is almost non-existent as is their understanding that artificially controlling the costs of much needed commodities always has a negative effect because it short-circuits the feedback mechanisms that indicate what various goods and services cost to provide. A perfectly good present day sample of that is Venezuela, where goods are scarce and the costs have skyrocketed despite the government's total control of prices and wages.

In regards to the push by these oh-so-helpful-and-compassionate founts of economic wisdom to help the folks making minimum wage, they'll be able to see the effects of their compassion and it will look like this: 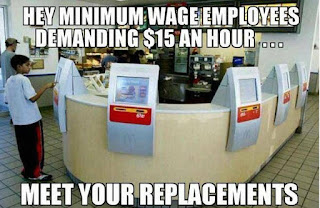