Friday night Deb and BeezleBub headed down to Meadowbrook to see Joan Jett and Lynyrd Skynyrd. Despite the wet and stormy weather they experienced the had a great time. Both of them thought Jett kicked ass. Not bad for a 50-year old rock chick!

I declined to go because I'd seen Skynyrd and Foghat down at Meadowbrook last summer and didn't feel the need to see Skynyrd again. (I like Skynyrd, not just so much that I want to see them two summers in a row.)

I've been on Facebook for a while now and it must be that I'm too damn old because I'm not drawn to spend hours every day surfing for friend's names and getting involved in a long list of online activities. Call me a fuddy-duddy, but I have better things to do with my time.

I do spend an hour or two every week catching up with friends, but I figure that's more than enough time.

It appears the government is very slow cutting checks for the rebates, leaving auto dealers in the lurch. Of the over $3 billion allocated for the program, only $145 million has been disbursed. The rest is in limbo, causing real cash flow problems for dealers. The dealers 'give' the customer the $3500 to $4500 rebate for turning in their clunker and buying a new, more efficient vehicle. The government is supposed to reimburse the dealer to pay for rebate as well as the immobilization and destruction of the vehicles.

But what happens when the government fails to reimburse the dealers? It leaves them holding the bag for the rebate and the cost of destroying the trade-ins.

If the government can't handle a simple program like Cash For Clunkers how can we possibly trust them to run a complicated and expensive program like health care?

From Hotair comes this revelation:

Percentage of dealer claims that had been reimbursed by the feds as of Thursday: Seven. How bad does a program have to be to goose sales as much as C4C has and still be badmouthed by the industry? This bad, I guess:

Laura Sodano, a sales manager at Curry Chevrolet in Scarsdale, N.Y., said dealers were not told why their applications had not been approved and were having to review the entire form to determine what went wrong.

“I don’t know one dealership that’s gotten paid yet,” Ms. Sodano said. “If they run out, we’re in trouble. It’s bringing us a lot of traffic, but it’s not a very good program.”…

If the funding is exhausted before all reimbursements are made, some dealers — and possibly G.M. — could end up having to write off the unpaid credits.

There’s actually a serious risk here that the feds are going to mismanage a simple car-rebate program into bankruptcy.

Ironically, it's the foreign automakers deriving the most benefit from the program as most of the new car sales have been going to Toyota, Honda,and others rather than Ford, GM, and Chrysler.

Could it be that Obama's stimulus program has actually hurt the economic recovery rather than help it?

Meanwhile, in Brazil, India, China, Japan and much of Continental Europe the recession has ended. In the second quarter this year, both the French and German economies grew by 0.3 percent, while the U.S. economy shrank by 1 percent. How can that be? Unlike America, France and Germany had no government stimulus worth speaking of, the Germans declining to go the Obama route on the quaint grounds that they couldn’t afford it. . . . And yet their recession has gone away. Of the world’s biggest economies, only the U.S., Britain and Italy are still contracting. All three are big stimulators, though Gordon Brown and Silvio Berlusconi can’t compete with Obama’s $800 billion porkapalooza. The president has borrowed more money to spend to less effect than anybody on the planet.

Hmm. Government intervention in the economy actually made things worse rather than leaving it alone and letting it fix itself. Where have we seen that before? (Think FDR.)

And they call us hatemongers and racists!

It appears these actions aren't random, but well organized.

This isn't news to me.

Obama is governing based on his belief the American people are incredibly dumb.

What he's finding out is that far too many of us are a lot smarter than he is.

Tom Bowler points us to a number of quotes and links showing Obama's contention the health care system is broken is nothing but a lie propagated to ensure a government takeover of health care, a means of taking more control of people's lives.

Even though this is Sunday, Edward Teach gives us some Saturday Random Awesomeness.

It is awesome indeed!

You've know the government has gone too far when they want to crack down on garage sales.

Eric the Viking wonders whether making it mandatory to have health insurance is constitutional or not. He, like me, believes it is not constitutional to do so.

The peasants are revolting and our Democratic 'elites' don't know what to do about it.

Payback's a bitch, ain't it?

I saw this and my only reaction was a skin-crawling “Ewwww!!” 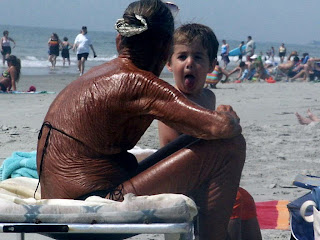 Skip reminds us that Obama should remember that he's President of the United States, not the SEIU. It's obvious he's forgotten that.

If we need yet another example why drivers should not be gabbing on their cell phones while driving, this one should be more than good enough.

What's worse, the 19 year-old driver that caused the accident just drove off, leaving the injured man behind.

Expatriate New Englander Tony Perreault laments the existing win-at-all-costs mentality infecting both sides in the health care reform/cap-and-trade/stimulus debates. However I think the Left has far more of those with that attitude than the moderates or the Right.

California Yankee digs into Obama's statements about those spreading falsehoods about health care reform and shows Obama is doing exactly the same thing.

Is this a case of 'Do as I say, not as I do'? It certainly wouldn't be the first time.

My dear brother posting over at Dean's World explains what is wrong with the news using two simple sentences.

How can this be? Obama's approval ratings have plummeted to the point where more people strongly disapprove of his performance than approve.

Am I surprised? Only that it's taken this long.

Glenn Reynolds has a roundup of Tea Parties at Knoxville, Asheville, Birmingham (Michigan, not Alabama), and Orlando, as well as Nashville, Franklin, St. Louis, and Florida.

It appears mcjoan over at the DailyKos doesn't understand the reason why all states have two senators representing them in Congress. In this post it is seen as a detriment to putting forward the leftist agenda, giving small states too much power to stand in the way of the socialist utopia.

Too bad that pesky United States Constitution is in their way.

And that's the news from Lake Winnipesaukee, where the humid weather is finally leaving, the pizza is in the oven, and where the kids are watching the calendar winding down to the first day of school.
Posted by DCE at 8/23/2009 07:49:00 PM
Email ThisBlogThis!Share to TwitterShare to FacebookShare to Pinterest