Call me a surly curmudgeon, an unabashed cynic who has earned his right to be cynical over almost 70 years on this earth, someone who has seen social mores eroded away, ethics cast aside for expediency’s sake, the relationships between the races torn asunder by the intolerant woke, and the covenant between men and women destroyed by those who see no issue with tearing apart families all in the name of ‘equality’ that has nothing to do with actual equality.

I have seen what we used to call dating devolve into what has become to be called ‘Hookup Culture’, with dating apps used not to meet up with potential romantic partners but for casual sex. I have heard more than a few young women state openly “The first marriage is for money. The second marriage is for love.” They were not being funny or facetious. I have heard young men declaring they have no desire to date or get married because they don’t trust women and have decided they have better things to do with their time.

Probably one of the worst things I have seen is the increasing divide between men and women, driven by those who see men and women as different species, with men being monsters who cause all of women’s ills. But men and women are human and like all humans there are differences between them. Yes, they communicate in different ways and that sometimes causes misunderstanding, but that’s something that has been understood for generations. Yet some folks try very hard to increase the misunderstanding and the negative emotions that go with them.

Then there’s love, something that has also been under attack. I could try to explain it, but I think that would be better explained by this meme rather succinctly: 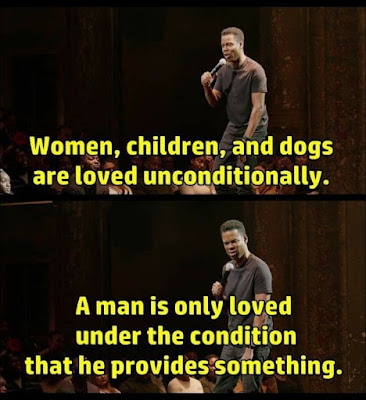