We had a lot of rain Friday and into yesterday morning, getting almost two inches of rain, something we’ve desperately needed. Hopefully it’s made a dent in the drought we’ve been experiencing since this past May and will help arrest or even reverse the falling water level of the lake. If nothing else it means I won’t have to pull the Official Weekend Pundit Lake Winnipesaukee Runabout out of the water early. That gives me two more weeks to enjoy the waning days of the boating season.


I keep reading about how “all” the polls are showing Biden ahead by a widening margin. Could this be why the Biden campaign has been having problems drawing people to their rallies and other events, being so far ahead that no one feels they need to show up anymore?

It doesn’t seem there’s much enthusiasm by voters for the Biden ticket. Is that the sign of a candidate that’s a shoe-in for the White House?

I see lots of comments on various posts being made by Biden trolls, touting the polls as an indication that Biden has this election in the bag. These same polls had Hillary as all but President-elect right up to the day of the election. The actual election results showed those polls were more wishful thinking than a indicator of Hillary’s inevitable win.

One would think people would take any of the polls with a huge grain of salt, particularly after their less than stellar performance back in 2016.


Just when I thought the Hollywood elite couldn’t go any lower, they prove me wrong.


The Leftist thugs are showing their thuggery, this time by beating a young woman who was carrying a Trump 2020 flag during a march in DC. 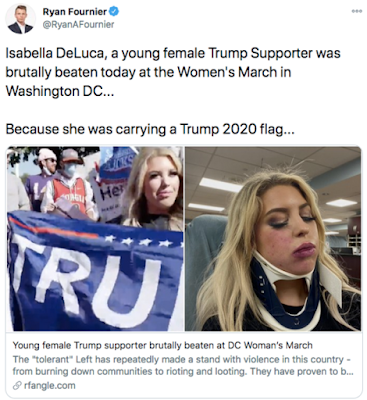 This is the kind of event we can count in increasing the closer we get to the election, as we can see from this attack by antifa during a free speech demonstration in San Francisco.

As the Associated Press reported:

A free speech demonstration staged by conservative activists quickly fell apart in downtown San Francisco on Saturday after several hundred counterprotesters surged the area, outnumbering and attacking those gathered, including knocking one in the mouth.

A photographer working for The Associated Press witnessed a Trump supporter being taken away in an ambulance and an injured San Francisco police officer on the ground by San Francisco’s United Nations Plaza.

Violence used to silence speech is becoming the norm, something that should concern everyone. Once it becomes an accepted practice, it will happen more often and it will escalate up to and including murder. It would be the end of this nation. But then, that’s what many of the people supporting the use of violence to silence speech are working towards. Or at least that’s what history shows us will happen.


Is a Second American Civil War a possibility? Experienced war correspondent Michael Yon has headed to Portland to dig deeper as he’s seen this kind of unrest devolve into civil war before.


And that’s the news from Lake Winnipesaukee, where we’re seeing relief from this past summer’s drought, the local farm stands are busier than ever, and where our boating season is winding down.
Posted by DCE at 10/18/2020 02:20:00 PM
Email ThisBlogThis!Share to TwitterShare to FacebookShare to Pinterest
Newer Post Older Post Home