I was taught there are three ways to lie.

Most people will tell untruths in a fashion that leads people to believe the lies. Others will lie by omission, telling the truth but leaving things out that changes the perception of the truth. More uncommon but one of the most effective ways to lie is to tell the absolute truth, leaving nothing out, but telling the truth in such a fashion that people believe that everything that was said was a lie. It is the second method that is used most often when someone uses statistics to prove their point. A case in point is this from the Pew Research Center (by way of Instapundit) that tries to paint a picture that is entirely deceiving, claiming that Covid-19 deaths have been declining in Democrat congressional districts, but have been stable in GOP districts, i.e., not declining. This is a screen capture of the tweet from Pew showing the decline. 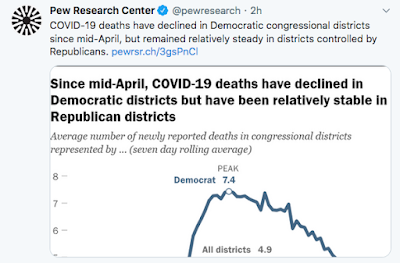 Looks like the Dem districts are indeed seeing a decline in Covid-19 deaths. See, it’s right there in the chart! But what’s missing?

The chart showing the deaths in GOP congressional districts.

Here’s the full chart showing the deaths in both Democrat and Republican districts. 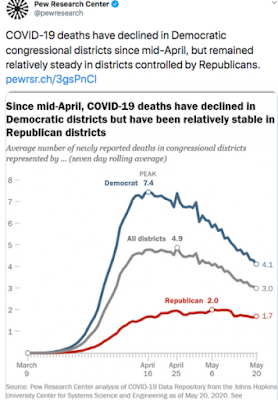 Looking at both sets of data one can now see the Pew Research Center was misleading the public with their tweet, even though they did not outright lie. Instead they withheld the information that changed the meaning of what they published. It was a lie of omission, one used to serve a specific narrative.
Posted by DCE at 5/27/2020 04:39:00 PM
Email ThisBlogThis!Share to TwitterShare to FacebookShare to Pinterest
Newer Post Older Post Home