I have to say that I have noticed the schizophrenic nature of Coronavirus America. While it hasn’t bothered me all that much, me being something of a misanthropic surly curmudgeon with elements of universal distrust, it has made some things more inconvenient.

One thing that I have noticed is that toilet paper continues to be in short supply, something I didn’t understand at first. The ‘panic buying’ that took place at the beginning made absolutely no sense to me or anyone else whatsoever. Now that many businesses are closed and so many are working from home, the usage of toilet paper at home has skyrocketed while that at businesses has plummeted. There is plenty of ‘commercial’ toilet paper available, but you won’t see it in any supermarket or convenience store. Much of it is different in that it isn’t made to fit into TP holders we see in our bathrooms.

How much longer will this toilet paper drought last?


One thing a lot of folks have been been saying is that we’re getting a preview of what a Socialist America will be like, all the time. At least one poll has found, most people are unimpressed with their 30-day free trial of Communism.

“It kinda sucks,” 19-year-old San Diegan Britta Fowler said of the trial. “I was expecting all this free stuff, which I guess we’re getting, but I also didn’t expect empty store shelves and house arrest for everyone. It’s really lame!”

“Yeah, they’re giving us money but what good is that if you can’t spend it on anything you want?” Fowler asked.

“We thought we’d entice the people everywhere into Communist utopia with a trial run,” USBS Secretary John Lennon said. “We thought, hey, it works with Netflix, so it should work with Communism!”

“Everything went well but only a few Karens across the country are really enjoying it.” Lennon added. “They really revel in telling people to ‘stay the f**k home!'”

“I don’t think I’ll continue with this Communism stuff after the trial. I kinda like being able to do stuff with people,” Fowler said.

As a good friend who grew up in the Soviet Union has told me, he’s been getting flashbacks of the bad old days when “standing on line” was a national past-time. You stood in line to get into stores that may or may not have what you’re looking for. Food, clothing, hygiene products, shoes, and a lengthy list of products and goods were in constant short supply. You couldn’t shop for a week’s worth of groceries because there wasn’t a week’s worth available anywhere but the black market. You had to shop every day to buy the staples needed.

This is the vision the Democrats have for us – total control over the population because we Deplorables aren’t capable of making our own decisions. They would love the world of the Hunger Games...as long as they were the elite living in the cities.

(ALERT: For those with poor sarcasm discrimination skills, some of this is sarcasm. Some is not. I’ll leave to you to figure out which is which.)


I think there may be some truth in this. 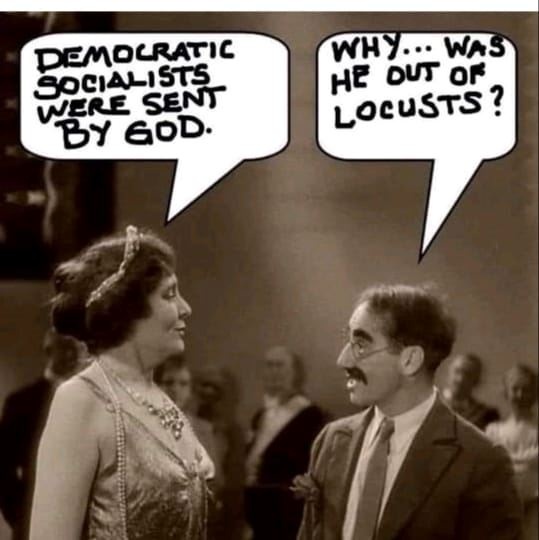 
Skip over at GraniteGrok has his opinion on the benefits to him and those like him regarding social distancing. As the illustration he used at the header of his post proclaims – “Introverts Unite!...Separately...In Your Own Homes!”

As I wrote in reply:

For me, a closeted misanthropic surly curmudgeon, this period in our history has been a relief for me. I don't have to socialize with anyone, nor am I expected to do so. My 'welcome' mat is no longer seen as a joke - "Welcome! Now Go Away!" - but as the height of social responsibility.

I work now mostly from home, something that allows me to get more work done with fewer interruptions. When I do have to go into the lab I am generally there with only two or three other people and we're all in different labs, so it's just like being there alone because they don't interrupt me and I don't interrupt them.

Most social interaction, at least for work, has been reduced to texts, e-mails, and the occasional video conference.

I am sure there are plenty of others out there with the same viewpoint.


Senator Ted Cruz (R-TX) slams clueless Glenn Kessler, one of those anti-American media types who has no problem trying to blame Trump for things he said in the past, those things said being true when Trump said them.

Yeah yeah, we know, you know that. But it’s like they keep getting suckier every day.

Glenn Kessler really thought this was something smart to tweet …

@GlennKesslerWP Line from Trump's State of the Union address that did not age well: "“Incredibly, the average unemployment rate under my administration is lower than any administration in the history of our country.”

Yeah, that thing the president said several months before this pandemic that is destroying economies all over the world … he was wrong.

The press HATED that, three months ago, we had the lowest African-American & Hispanic unemployment ever recorded. Now that we’re in the midst of a global pandemic—which originated in Wuhan, not the Oval Office—too many in the press are giddy with glee.

Haters gotta hate. Apparently Glenn Kessler is one of them.


Mike Hendrix over at Cold Fury tells us the numbers just don’t add up when it comes to coronavirus projections. He’s not the only one.

Ed Mosca over at GraniteGrok has been tracking projected Covid-19 cases here in New Hampshire with the actual numbers appearing. The two are nowhere near each other.


And that’s the news from quarantined Lake Winnipesaukee, where Ice Out is going to be declared any time now, the number of out-of-state plates seen has been increasing, and where even though Monday is coming again too soon, I don’t care because I’ll be working from home.
Posted by DCE at 4/05/2020 12:00:00 PM
Email ThisBlogThis!Share to TwitterShare to FacebookShare to Pinterest
Newer Post Older Post Home