There wasn't anything in the way of outdoor activities at The Manse this weekend as Mother Nature didn't cooperate and rain dominated the weather for the most part. Even though there was some sun Saturday, the decks weren't dry enough to sand or stain so there was no progress made for that project.

So other than doing some laundry and a little cleaning up inside and outside, not much got done this weekend.

I think the President can no longer blame Bush for anything taking place on Obama's watch, particularly the budget deficits. The latest projections of shortfalls exceed $1.2 trillion (that's “trillion” with a “T”), which is still greater than seven Bush budgets combined. (Yes, seven budgets. His last budget never saw the light of day due to purposeful foot-dragging by congressional Democrats, waiting until after Bush left office before passing a budget $600 billion out of balance, which President Obama signed. Perhaps we should label that last budget the Pelosi budget as it was hers and not Bush's.)

Of course it might help if the Senate Democrats would ever get off derrieres and pass an Obama budget, something they haven't done in over 3 and a half years.

As Glenn Reynolds constantly asks, “How's that hopey-changey stuff workin' out for ya?”

Let's add yet another bit of abuse upon the Obama administration for its lack of understanding about economics.

It appears the feds are ready to commit the same stupid act that helped usher in the housing bubble and mortgage crisis: use the Community Reinvestment Act to force banks to give mortgages to low-credit-rated blacks and Hispanics. The feds are already threatening banks refusing to do so. But wait, there's more!

Moreover, this time they're going even further. They're going to take over the credit rating agencies and force them to change their standards to accommodate blacks and Hispanics so that nobody will have any idea who is a bad credit risk and who is not. In so many words, the government is about impose its will on the whole home-lending market and force another round of bad loans so that the banks are going to be looted once again so that even the federal government may not be able to bail them out this time.

It's bad enough the CRA was used as a bludgeon before (with the help of community organizer Obama who was part of a class action suit that forced banks to lend to unqualified borrowers). Now they want to do it again as if the results will be different this time. And rather than being pushed by the Justice Departent or Fannie Mae or Freddie Mac, it's a side effect of the that damnable Frank-Dodd Act which created the Consumer Finance Protect Bureau, with the emphasis on “Protection”, Chicago mob-style) , which has had nothing but negative effects on the economy, consumers, and the banks.

These idiots still don't understand the concept, have no inking that the results won't be any different than the last time, except maybe worse. And if there's no way for banks to check the creditworthiness of a potential borrower then they probably won't lend to anyone, black, Hispanic, Asian, or white. (That isn't discrimination if they won't lend to anyone, is it?) And I have to wonder if taking over the credit bureaus will end up tying up the feds for years as the bureaus take them to court.

Yeah, that ought to help the economy recover. Yup. Really. Uh-huh.....

Another argument that can be put forth to stop the nonsense explained above: We can make the claim the government is putting forward a racist policy, giving preferential treatment of one or more races over another at the expense of that 'other'. Maybe we can con the ACLU into filing a class action suit if we frame the argument that non-blacks and non-Hispanics are being discriminated against.

But then the Democrat Party was always the party of racism, discrimination, and Jim Crow laws.

There are all kinds of indices that give us a feeling for how the economy is performing (or more recently, not performing). Some look at the stock market, others at bonds, and yet others at costs of commodities and consumer goods. But there's one that is overlooked that has a pretty decent record (82% correlation) in showing us what's happening with the economy. Call it the Garbage Index.

Despite all the claims made by the Obama administration how the economy is getting better, the Garbage Index says otherwise. 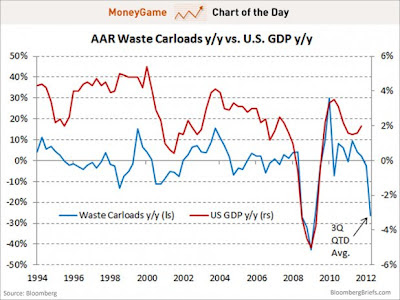 As one of Glenn Reynolds readers comments, “That waste car load chart also hints there may have been some creative accounting regarding GDP numbers during “Recovery Summer”, after pretty decent correlation in previous years.”

Skip at GraniteGrok warns us about a move by outgoing Democrat Governor John Lynch to take away our water rights here in New Hampshire.

The argument put forward by the commission overseeing this property grab? It's for the common good. Isn't that always the answer by those who think they know better than you do how to run your own lives or control your property?

There has been no legislative oversight nor much in the way of public input (meetings on this subject by the commission are usually scheduled when most folks concerned with this issue are at work).

I remember when a previous Democrat governor thought it would be a great idea to take control of all shoreland along the various lakes, ponds, and rivers in New Hampshire “for the common good” until it was pointed out that since it would deprive property owners of their land the state would have to buy it from them (eminent domain, don'cha see) at the cost of over a $1 billion, something the state didn't have and that the taxpayers would balk at spending.

Could water rights be the same thing, with the state taking away 'property' from land owners without just compensation?

If we need further examples of how almost every plan Obama has for the economy falls under the Law of Unintended Consequences, here's one by way of Cap'n Teach.

A medical equipment manufacturer has scrapped plans to open five new plants in the US because the taxes imposed by ObamaCare has made it financially impossible to do so without taking a sustained loss. No business is in business to take a loss.

With those factories now canceled, the potential 1500 jobs that would have been created by them have also gone by the wayside. Also, with the additional taxes the business in question, Cook Medical, the actual impact will reduce after tax earnings by the company by an additional 15 percent. This is supposed to help the economy how?

The Chick-fil-A scandal continues, in this case with a good dose of Palin Derangement Syndrome thrown in.

You have to hand it to the Progressives, they really know how to hate. They also show how truly intolerant they are, but then we already knew that.

There's also this on the Chick-fil-A brouhaha: Apparently a number of city mayors seem to think it's up to them to decide who can and cannot sell chicken sandwiches based entirely upon the business owners' personal political and/or religious beliefs.

Call it yet another version of Chicago mob-style thuggery.

And that's the news from Lake Winnipesaukee, where the rain is falling, yard work has stopped, and where there's still so much to do.
Posted by DCE at 7/29/2012 09:07:00 PM
Email ThisBlogThis!Share to TwitterShare to FacebookShare to Pinterest
Newer Post Older Post Home