As the details of President Obama's plans come to light, is it any wonder that some people are “going Galt”?

For those of you unfamiliar with the term, “going Galt” is a reference to the character John Galt in Ayn Rand's Atlas Shrugged. Galt, refusing to be victimized by the 'looters' (those believing the fruits of your labors belong to them “for the good of society”), goes on strike, withdrawing his talent and knowhow from them and letting them try to survive without him.

Across the broad conservative movement, from members of Congress to activists to economists, Rand’s final, allegorical novel is being looked at with fresh eyes. According to the Atlas Society, a think tank that promotes and analyzes Rand’s work, sales of “Atlas Shrugged” have tripled since the presidential election. One congressman says that Rand wrote a “rulebook” that can guide conservatives through the age of Obama; another calls Obama’s policies something right out of the mind of Rand. One economist says that Rand’s fantasies have become reality. Smith is one of many activists citing Rand to explain their decisions to sell their stocks, or to explain why the president’s “demonization” of run-amok CEOs is aggravating the economic slowdown. The popular meme is giving critics of the president’s policies a way to explain why, they believe, it’s doomed to fail — because Rand predicted all of this…

Smith, who’s still mulling over ways that she can “go Galt,” sees a possibility for a moral stand. During the Iraq War, she read about a painter who’d painted less, reducing his income, in order to dodge taxes and thereby make sure he didn’t fund the war. “I’d go John Galt just to not pay for programs I don’t believe in,” said Smith. “If we’re opposed to socialistic concepts — if we know they don’t work — why should we pay to support them?”

Somehow Obama and his minions in Congress have come to believe that the money we earn doesn't really belong to us. Rather they believe it belongs to them to use as they see fit “for the good of society”. But society doesn't agree with him. Those that make the economy work have decided they aren't going to play by his rules and are taking their money and their talents and going on strike. One sure sign of this is the stock market, where Wall Street reacts every time the President lays out details of his plans by pulling money out of the market. They know if they leave it there he'll find some way of taking it away from them. It's no wonder the Dow dropped below 7,000 since he took office. 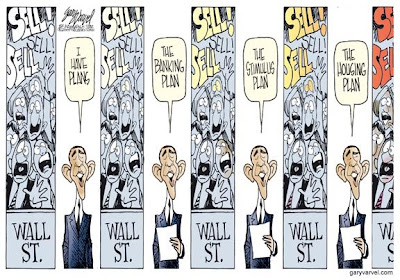 'Nuff said.
Posted by DCE at 3/07/2009 11:57:00 PM
Email ThisBlogThis!Share to TwitterShare to FacebookShare to Pinterest