Yesterday was our little town’s Old Home Day, a celebration of our town, it’s people – both present and past residents – and its history. There’s a parade, all kinds of food trucks/trailers, crafts, music, games, and during the evening, a band concert and fireworks. Each year Old Home Day has a theme, with this year’s being The Movies.

We had a number of politicians in our parade, folks running for both state and federal offices – New Hampshire House and Senate, and US House of Representatives. I had a chance to speak with a number of them which cemented my decisions about which ones I would be voting for in the upcoming state primaries next month.


It looks like hot, hazy, and humid weather is on its way back to New Hampshire this week, though it won’t be nearly as hot as what we experienced earlier in the month nor will it be around for more than a couple of days.

I was discussing the summer weather and its effect on boating traffic on the lake with an acquaintance of mine at the aforementioned Old Home Day. He works for one of the local radio stations and we got to talking about boating and I mentioned that I haven’t been out on the lake anywhere near as often as I usually am, between the high gas prices and high temperatures we’ve experienced.

He mentioned his discussions with a number of marina operators, particularly regarding boat traffic and he was surprised to find that the number of boaters out on the lake during hot weather is actually lower than during more normal temps. It seems counterintuitive, but on really hot days the last place some people want to be out in the sun with no shade, even with all that water surrounding them. It is not a comfortable place to be, even with shade.


I saw this great sarcastic ad lambasting Biden’s decision to ‘forgive’ portions of student loans by making the rest of us pay for it.

This should be played at every opportunity between now and the mid-terms in November.


Is this the beginning of the end for the Big Three networks?

It’s no secret that the major, over-the-air TV networks are losing viewers to streaming services and cable TV. But almost from the start of the television age, ABC, CBS, and NBC have broadcast three hours of programming in prime time, 7–10 p.m. (8-11 p.m. on the East Coast – ed.)

Now NBC is seriously considering dropping programming in its 10–11 p.m. EST slot. It’s expected that NBC would return that seven hours a week to local broadcasters.

The move would certainly save money. Not having to program an hour-long drama in that slot will be a huge cost-cutting measure, considering the average hour-long TV drama episode costs around $4.5 to $5 million. Multiply that by 20–25 times a season and the savings would be significant.

I looked at my own viewing habits and came to realize I watch very few hours of ABC, CBS, or NBC programming these days. I watch some local programming, primarily our local news and New Hampshire-centric shows like New Hampshire Chronicle and New Hampshire Life, the first on our local TV station and the second on NESN. I also tend to watch shows on Netflix, Amazon Prime, and a couple of other streaming services.

One has to wonder if ABC and CBS will be be following NBC’s lead on this.


From the “Just When I Thought They Couldn’t Get Any Stupider” Department comes this:

Whiteboards are racist because 'they collaborate with white organizational culture'.

Did a recent physics study argue that whiteboards are racist?

"Observing Whiteness in Introductory Physics: A Case Study" was published last month in Physical Review Physics Education Research. The study observed three students as they worked to solve a physics problem and analyzed how "whiteness" is present in academia.

The study found that whiteboards can have racist undertones and perpetuate whiteness.

Hairston told Campus Reform that although whiteboards "are not inherently racist," the common classroom object can perpetuate racism.

What about blackboards? Are they racist, too? What about large LCD screens used for the same purpose as whiteboards/blackboards? Can a sheet of paper be racist? Where do we draw line?

What the study (and a lot of the wokerati) ignore is that objects cannot be racist. They are inanimate objects. Only people can be racist. What’s worse is that the very people assigning racist attributes to objects are quite often “the racists in the room”...and they don’t even realize it. If they do, they don’t care because they ‘support the narrative’ or are just stirring up s**t.


To close out this week’s TOAS, there’s this little bit of advice:


This isn’t how you’re supposed to launch your boat. 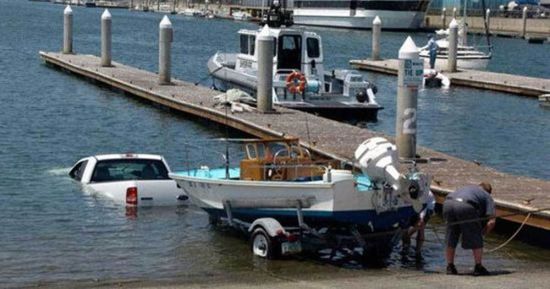 
And that’s the news from Lake Winnipesaukee, where the weather has been great, we’re heading back into HHH weather, and where once again Monday is returning all too soon to punish us for having a good weekend.
Posted by DCE at 8/28/2022 11:00:00 AM
Email ThisBlogThis!Share to TwitterShare to FacebookShare to Pinterest
Newer Post Older Post Home