Thoughts On A Sunday - Monday Edition

It seems Old Man Winter gave us a bit of a preview the day after Sunday, with snow that accumulated just enough to make some of the roads rather greasy. More than a few folks ended up off the road, at least from what I saw on my way back from a work related trip to the Boston area.

I wouldn't have minded this all that much if I had some decent winter tires on the trusty Ram 1500, but I didn't. Even with 4WD there were a few places where I couldn't get reasonable traction and had to work my way slowly home.

What really bothered me were some of the drivers going way too fast for conditions along some stretches of road and others going way too slow. The latter seemed to thing that the slick road conditions were everywhere when they weren't. A large majority of the roads were just wet with no snow or slush accumulation. However that didn't stop some of these drivers from going 20 to 30mph below the posted limits, meaning they crawled along at 15 MPH. They wouldn't drive that slow if it had been just raining. It wasn't like they had to worry about black ice because the road surfaces were too warm for that and there was little if any snow accumulation on the grass. That's usually a good indication that the road surface is just wet, not slick.


It seems the GPS Fusion dossier issue just won't go away for the Democrats.

As much as they hoped it would sink Trump, it has come back to bite them because it points to things the Democrats paid for that have ties to the Russians as well as other unsavory (and illegal) actions taken at the behest of the DNC and Clinton campaign.

Between the so-called 'opposition research' and contacts with the Russian lawyer who was supposedly going to give the Trump campaign dirt on Hillary (which was rejected by the Trump organization), it looks like the Democrats ended up in a trap of their own making.


To quote Cap'n Teach, “Goodness, law enforcement officials wanting to enforce the law? To get tough on crime and criminals? To make punishment painful? How terrible!!!!!!!!!”

That's right. It appears a growing number of local law enforcement officials are ignoring 'sanctuary city/state' declarations and informing ICE of the arrests of illegal aliens on their wanted lists, as well as enforcing other laws that municipal or state officials have chosen to ignore. In other words, they're being tough on criminals which is exactly what they're supposed to do.


This is something you won't see in the LSM.

Reductions of CO2 emissions in US dwarf that of the rest of the world.

In fact, it has reduced its CO2 emissions more than the rest of the world combined. What's even better is that we didn't need Kyoto or Paris to make it happen.

For those of you not aware of it, the US Senate didn't give their consent to President Clinton's signing of the Kyoto Protocol, rejecting it by a 97-0 vote against. (This is part of Article II, Section 2, second clause of the US Constitution). President Obama didn't even bother to bring his signing of the Paris Accords before the Senate because he knew it wouldn't happen, thus violating the US Constitution.


And the witch hunt(s) continue.

Victor Davis Hanson delves into the present day witch hunt which consists of “about six months [of] cable news shows, the internet, and the major newspapers ginned up the charge of “Russian collusion”—as a means of explaining the otherwise inexplicable and unacceptable defeat of Hillary Clinton by someone without either political or military experience.”

Like all witch hunts, it will continue until they find a witch, even if they have to find an innocent person to immolate so they can say “See! We found one!” That is the nature of witch hunts.

So far this one has been a abject failure and the people are rightfully sick of it. Even some of my more avid Democrat friends an acquaintances are saying that this one is really a “nothingburger” put forth by the DNC to shift blame for Hillary's campaign misjudging the mood of the voters. It didn't help that she characterized half of them as “a basket of deplorables.” But that won't stop the DNC and Hillary Faithful from continuing the hunt.


Then there's these anti-rape tips from the two sides of the political aisle. Which one would you prefer? 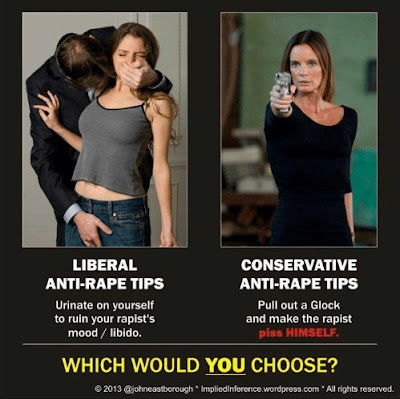 
And that's the news from Lake Winnipesaukee, where we've had our upcoming winter preview, work around The Manse is coming to a close for the year, and where Monday returned all too soon.
Posted by DCE at 11/13/2017 10:29:00 PM
Email ThisBlogThis!Share to TwitterShare to FacebookShare to Pinterest
Newer Post Older Post Home