Things are back to normal here at The Manse now that BeezleBub has recovered from his trip to St. Louis for the FIRST Robotics World Championships.

One thing I've noticed since he's back at school is that he's suffering from a moderate form of 'senioritis'. He's feeling less motivated to do homework or to put full effort into his classes because he has less than four weeks of school left before he graduates. It's not surprising. But both Deb and I are staying on his case, making sure he finishes his assignments in a timely (and complete) fashion.

While we had a rather dry winter, spring is more than making up for it with rain almost all last week and for a few days this coming week. At least yesterday and today was warm and sunny, as will it will also be on Monday. But on Tuesday through Thursday we'll be back in the rain.

It certainly hasn't made it easy to get any yard work done during the week. (I much prefer to do it during the week because I have much better things to do on weekends.)

As I constantly have to remind many of my friends, Cinqo de Mayo isn't all that big a deal in Mexico. It's right up there with St. Patrick's Day in Ireland. Both are purely American holidays.

But I do have to make the disclosure that St. Patrick's Day is gaining momentum in Ireland, again something driven by Americans of Irish descent. But then there are more Irish in the US than there are in Ireland, so that might have something to do with it.

We keep hearing the 'dropping' unemployment numbers being touted by the Obama Administration as a show that Obamanomics is working. But what they choose to sweep under the carpet is why those numbers are dropping. It has nothing to do with more Americans being employed so much as it does with them dropping out of the labor force. If one takes a look at the overall employment numbers which include both underemployed (working part time or in jobs for which they are greatly overqualified) and those who have given up looking for work, the actual unemployment rate is closer to 16%.

The labor participation rate is the lowest it's been since 1981. How is this good news? But to hear Obama tell it things are just great.

Newsbusters digs into the New York Times' efforts to stir up racial strife in regards to the upcoming 2012 Presidential campaigns.

It appears the only racists left in the country work for the Lame Stream Media. Most Americans could not care less about the issue.

Cap'n Teach offers this cautionary tale of the sperm donor in Obama's “Life of Julia” tale.

Age 22: Peter’s in his senior year, working towards his Sociology degree. He supplements his meager income from student loans and a part time job down at the local Subway by selling his sperm to a local sperm bank, and signs documents which state that all “donations” will be kept completely anonymous.

Age 27: Peter moves up the ladder, and is finally able to make money by skimming money from government grants. He receives a letter in the mail from Julia’s lawyer slapping him with a paternity suit.

Age 28: Peter attempts to fight the suit, but, a liberal judge throws out the legal non-disclosure forms, saying Peter has to Do His Part. Peter’s still in debt from college, and also has some sort of strange disease from his time in the 3rd world s***hole. Very few doctors accept his insurance and government centers have months long waits. He starts filing phony reports to the government in order to get more money.

And it goes down hill from there.

Looking at the TV show lists, I'm not surprised at the dichotomy at all. That there are shows that both sides like (or dislike) equally is also not surprising.

Glenn Reynolds asks and answers the question “What comes after the higher education bubble?”

I know I'll be availing myself of a number of classes MIT will be offering which will help my career advance. The cool thing is that MIT will offer certificates of completion if you can pass the final exam. That part won't be free, but it will still be a fraction of the cost of actually taking the course at MIT.

As someone once asked (it might have even been Glenn), what would you prefer to have? A Princeton education without the diploma, or a Princeton diploma without the education? It all goes back to the “credentialed, not educated” meme.

What excuse will Obama use to kill the Keystone XL pipeline this time? And how will he justify killing American jobs and making the US even less energy secure? Somehow I doubt his campaign will use the pipeline as an issue.

I thought this was cool: maps showing the invisible borders that define American culture. The map below shows an interesting phenomenon, but it isn't what you might think it is. To find out what it means, Read The Whole Thing. 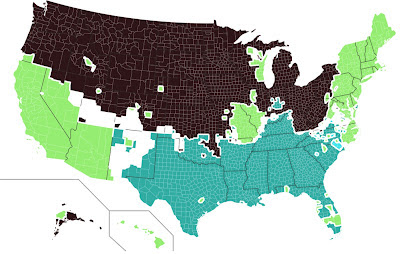 And that's the news from Lake Winnipesaukee, where kids are thinking of the coming summer, the rains have held off for the weekend, and where soda pop is sometimes called 'tonic' by summerfolk.
Posted by DCE at 5/06/2012 06:54:00 PM
Email ThisBlogThis!Share to TwitterShare to FacebookShare to Pinterest
Newer Post Older Post Home