The rain has finally arrived.

It's been very dry here in New England, with little rain or snow and above normal temperatures over the past couple of months. Everything has been tinder dry, creating a huge fire hazard and making headaches for fire departments and forestry services across the region.

We had some light rain over night and expect heavy rains to arrive late tonight or early tomorrow morning which should take care of the dry conditions for now.

Of course this rain does have a downside, that being black flies and mosquitoes will now multiply.

BeezleBub is getting prepared for his FIRST robotics team's Tuesday departure for St. Louis. His high school's team was one of the three regional winners in the FIRST competition earlier this year, earning them the right to compete in the FIRST World Championship in St. Louis this coming week.

I did my part, making sure all of his clothing (team shirts, etc) are clean and ready to pack. I also lent him what meager expertise I have in packing for a trip, having made more than a few intercontinental trips in the past. Number 1 tip: Pack light. The biggest problem most folks have is that they take too damn much stuff with them. Sometimes this means they have to check their luggage which in turn means baggage fees ($50 for the flights the team is taking to and from St. Louis). For the 5 days/ 4 nights they'll be there he should need no more than 5 shirts (one a little dressier than the rest), two pairs of pants, 4 sets of briefs, and 5 pairs of socks. (You can never have too many socks.)

Is it just me or has the media frenzy about Catastrophic Anthropogenic Global Warming died down quite a bit? It seemed there were daily stories about how we were all doomed if we didn't go back to pre-Industrial ways of life and/or cut back the world's population by some horrifically huge number.

ClimateGate 1.0 and 2.0 may have something to do with that drop off as the “settled science” turned out not to be settled at all and a number of assumptions made by CAGW proponents came under closer scrutiny. It also doesn't help their cause that studies suggest there have been massive increases in scientific fraud.

Of course I expect there to be another round of media hysteria about CAGW once they get past trying to foment race riots and bring about the lynching of George Zimmerman.

Bogie gives us a little insight into getting her fork truck license.

From Blue's Blog by way of Scary Yankee Chick comes a picture of a sign I'd like to see at my place of employment. 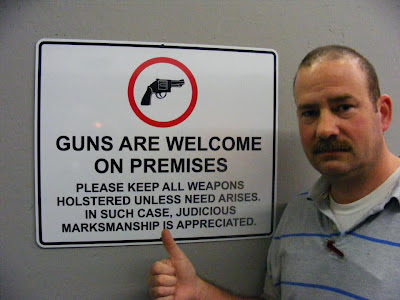 Also by way of Scary Yankee Chick comes this story about hundreds of thousands of infected computers that will lose their Internet service come this July.

Fortunately the fix is pretty straightforward and instructions for checking your computer are included in the AP article. As the article states, it's mostly home computers that may have been infected by way of an Internet ad scam. (In case you're wondering, I did check the validity of this story and the fix and it is legitimate.)

The Great California Exodus continues, with more people and businesses fleeing the ever more oppressive Golden State than are moving in. As US demographer Joel Kotkin has reported, over 4 million more people have left California over the past 2 decades than have moved in. Overregulation is but one of the factors that have led people to abandon California for better economic climes.

Part of California's dysfunction, he says, stems from state and local government restrictions on development. These policies have artificially limited housing supply and put a premium on real estate in coastal regions.

"Basically, if you don't own a piece of Facebook or Google and you haven't robbed a bank and don't have rich parents, then your chances of being able to buy a house or raise a family in the Bay Area or in most of coastal California is pretty weak," says Mr. Kotkin.

While many middle-class families have moved inland, those regions don't have the same allure or amenities as the coast. People might as well move to Nevada or Texas, where housing and everything else is cheaper and there's no income tax.

Give people enough incentive to leave, and they will, taking their money (tax revenues) and their jobs (even more tax revenues) with them.

So endith the lesson. The question is, will the Powers That Be in California learn that lesson before it's too late? If we have to go by previous and proposed actions, then the answer is an unequivocal no.

If California isn't enough of a lesson on the failures of socialism (let's face it, California is a socialist state), then perhaps Venezuela will suffice.

After years of Hugo Chavez's socialism in that once prosperous country, the economy is in a shambles, the electrical infrastructure has been breaking down, their oil infrastructure doing likewise, and now there are food shortages.

It seems that in just about every country dominated by socialist economics food shortages are the norm. The old joke in the now defunct Soviet Union used to run:

“Is this the line for the store that doesn't have shoes?”

“No. This is the line for the store that doesn't have bread.”

It appears that joke is making a comeback in Venezuela.

Here's a lesson in economics President Obama might consider looking at, even briefly, before tearing off on yet another round of “Let's tax the heck out of the rich!” In this case, he should look at the examples of the 50 states, how they handle taxes, and the effects taxes have on their economies.

In California, a union-backed ballot initiative would raise the state's highest tax rate to 13.3%. Union-funded groups in Illinois aren't satisfied with last year's income tax rate hike to 5% from 3%, so they now want to go as high as 11%. That would put them in the big leagues with California and New York. And in Oregon, lawmakers are considering raising the highest rate to 13% from 9.9%. In all of these states, proponents parrot Mr. Obama, insisting that the rich can afford it.

They can, but they can also afford to save hundreds of thousands or more each year by getting out of Dodge. Every time California, Illinois or New York raises taxes on millionaires, Florida, Texas and Tennessee see an influx of rich people who buy homes, start businesses and shop in the local economy.

Asked why he wants to reduce the cost of doing business in Wisconsin, Gov. Scott Walker replies: "I've never seen a store get more customers by raising its prices, but I've seen customers knock down the doors when they cut prices."

Georgia, Kansas, Missouri and Oklahoma are now racing to become America's 10th state without an income tax. All of them want what Texas has (almost half of all net new jobs in America over the last decade, for one thing).

My home state of New Hampshire has neither an income or sales tax. Even during the deepest part of the recession New Hampshire didn't suffer nearly as much unemployment as surrounding states, and actually saw some growth in both population and its economy while other states in the Northeast lost population and jobs.

Though there were a few stumbles by the legislature when there was a Democrat majority in both the House and Senate (they increased spending based upon pie-in-the-sky revenue projections and increased business taxes during the worst part of the recession), in 2010 Republicans routed the Democrats in both chambers, securing a supermajority in the House and one vote shy of a supermajority in the Senate. The legislature reversed the economy-killing measures enacted during the previous legislature. Not surprising to many, economic activity increased and the state saw higher tax revenues. Amazing how that works, isn't it?

As LabRat over at Atomic Nerds reminds us, high school is not real life. It doesn't even come close.

...successfully transcending the social realities of high school isn’t that much of a thing to celebrate so much as getting over with as quickly as possible, just because life immediately ceases to be like school the second you leave it. Lots of people continue going through the motions as though it were, but it’s because the only patterns they know and no one bothered to tell them that contrary to preparing them with rigorous accuracy for adult life, school gave them a highly artificial reality that must be adjusted away from. There should really be some sort of an exit briefing at or after graduation, just so you are warned, whether or not you choose to listen to any of it.

He then goes on to list the 5 important things you have to know to survive in the real world.

The lesson LabRat puts forth reminds me of something the WP Dad told me when I was suffering through the vagaries of life in high school. It is advice that I have since passed on to others, including BeezleBub and various other family members and friends. It all boils down to this:

Nothing that went on in high school will matter worth a damn to anyone 5 seconds after you graduate.

That one thing got me through some tough times in high school.

And that's the news from Lake Winnipesaukee, where badly needed rain has arrived, yard work has stopped (for now), and yet again Monday has arrived all too soon!
Posted by DCE at 4/22/2012 03:59:00 PM
Email ThisBlogThis!Share to TwitterShare to FacebookShare to Pinterest
Newer Post Older Post Home