It's hard to believe that Memorial Day weekend is almost here. Where has the time gone?

Preparations for launching the Official Weekend Pundit Lake Winnipesaukee Runabout (aka The Boat) continue. The winter cover has been removed, the interior and the hull cleaned, the various drain plugs reinstalled, the batteries charged, and some of the gear has been stowed on board. The rest of the gear will be put on board over the upcoming week, the gas tank will be filled, and given the time and good weather conditions, The Boat will be launched and will be berthed at its slip before the holiday weekend arrives.

The summerfolk have been making their presence known as they gear up for the upcoming summer. Camps and cottages have been opened up and aired out, boats have been launched or prepped for launch, and a good number of summer businesses have opened their doors.

While the calendar says summer doesn't officially begin until June 21st, for all intents and purposes it's already here. While the water temps in the lakes, ponds, rivers and streams are still quite cold, that hasn't stopped some folks from enjoying themselves, even though briefly, in the water. We have certainly seen a lot of boat traffic out on Winnipesaukee and 'official' summer is still over a month away.


One has to wonder what the next thing the friggin SJW's are going t0 declare as racist? They've already said that math is racist. And so is wood paneling, apparently.

I have a solution for them if they really want to eliminate racism: go gather all of your like-minded SJW brethren, move to an island large enough to sustain you, and live the lives you are trying to impose on everyone else. Then we'll see if you can really actually survive.

My guess – most of you will be dead, killed off by one set of SJW's who feel the rest aren't really SJW's.


And speaking of Social Justice Warriors, here's one who finally took a close look at the entire movement and decided it was nothing more than yet another religious cult, one becoming increasingly violent and dehumanizing, and decide it was time to divorce herself from it.

I see increasing numbers of so-called liberals cheering censorship and defending violence as a response to speech. I see seemingly reasonable people wishing death on others and laughing at escalating suicide and addiction rates of the white working class. I see liberal think pieces written in opposition to expressing empathy or civility in interactions with those with whom we disagree. I see 63 million Trump voters written off as “nazis” who are okay to target with physical violence. I see concepts like equality and justice being used as a mask for resentful, murderous rage.

How easy is it for ordinary humans to commit atrocious acts? History teaches us it’s pretty damn easy when you are blinded to your own hypocrisy. When you believe you are morally superior, when you have dehumanized those you disagree with, you can justify almost anything. In a particularly vocal part of the left, justification for dehumanizing and committing violence against those on the right has already begun.

As the saying goes, Read The Whole Thing.


This article points to a growing trend amongst millennial women – dating up. In this case it means dating men who are older than they are.

The reason? Here's a clue:

More and more women I know are dating men twice, yes twice, their age. In her...film, The Intern, Anne Hathaway stands with Robert DeNiro and a bunch of young male colleagues in a bar and draws a harsh comparison: “How in one generation have men gone from guys like Jack Nicholson and Harrison Ford to . . .?” She gestures despairingly at the four men in front of her, archetypes of my generation in their hoodies, craft beer in one hand, iPhone in the other, with their untrimmed beards and general lack of ambition. I see what Hathaway means: Why put up with Tinder when there’s a whole generation of men out there who wouldn’t dream of using it?


I have brought this up more than once and to this day no one from the “Tax The S**t Out Of Everyone” Left has been able to explain this away, at least not to my satisfaction. Too many times I've heard them bleat about feelz and little else. They are sure want to be pretty free with the money they want take from the rest of us who earned it.


This is all too true. Too bad too many of our youth end up learning this years too late, if at all.

One of life's most important rules: You Must Learn To Live With the Consequences of Your Decisions… 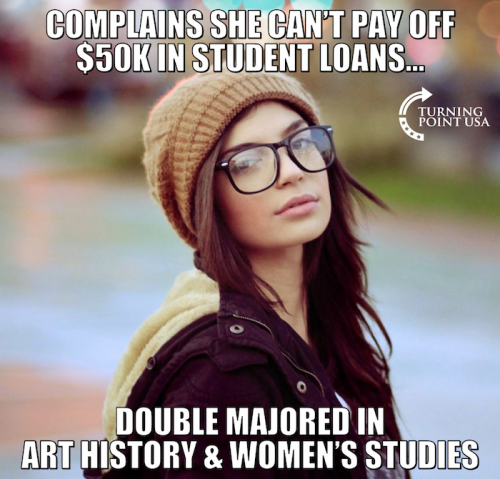 She has a future working at Starbucks as a barista, or if she's really willing to dig deep, as an exotic dancer in a male privileged, misogynistic “gentlemen's” club...or a homeless bag lady.


And that's the news from Lake Winnipesaukee, where wet weather is arriving for Monday, Memorial Day is just around the corner, and everyone's grill has been getting a workout regularly.
Posted by DCE at 5/21/2017 11:19:00 PM
Email ThisBlogThis!Share to TwitterShare to FacebookShare to Pinterest
Newer Post Older Post Home