I must admit to an oversight. I didn't post last night because I forgot. I had plenty to write about, but I was sidetracked by another event – BeezleBub's prom night.

Deb, the WP Mom-In-Law, her mother-in-law (BeezleBub's great-grandmother), and I went to the high school for the Grand March, where the couples attending the prom were presented to the public. After that they departed the school and arrived at Weirs Beach to board the M/S Mount Washington cruise ship, host to their prom.

Deb returned to work and the WP Mom-In-Law, her mother-in-law, and I went out to eat. After dinner we returned to The Manse and the next few hours were spent in conversation. I didn't realize how late it was until BeezleBub returned home (about a half hour before midnight). I have no idea where the time went. The chances of writing anything meaningful had disappeared, particularly since it was so late and bed beckoned.

I did manage to snag one quick picture of BeezleBub and his date, Hobbit. Ain't they cute? 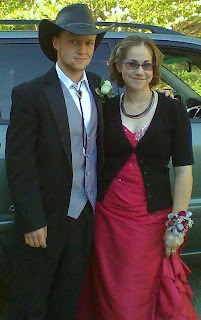